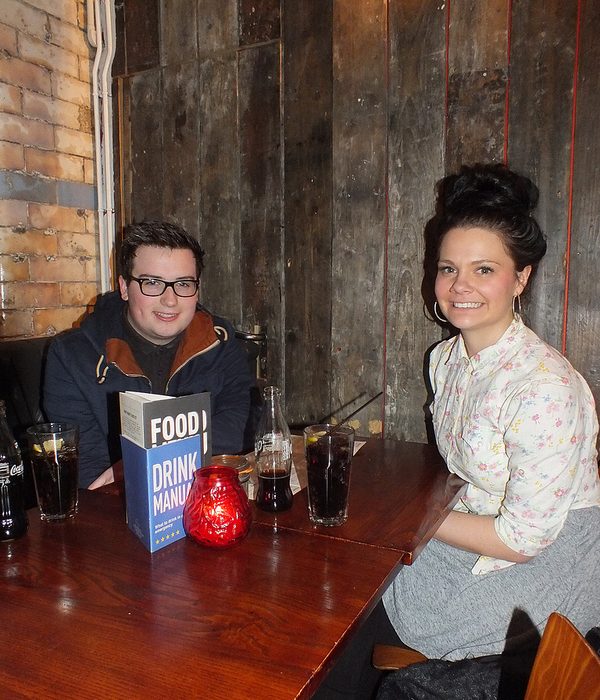 First impressions? She looked nice, very pretty and well-dressed. She didn’t wear heels either which I liked, because I don’t like it when girls are too over-done. She’s a brunette though, and I usually go for blondes.

Did the date get off to a flying start? I think so, I made her laugh quite a bit which is always good. She was easy to chat to and we had a fair bit in common.

Best features? Nice smile with lovely teeth- she told me she’d had braces for years. She also had a natural tan, which was good because I can’t stand orange-looking girls who fake tan all the time.

Any awkward moments? I think I told some risky jokes that she wasn’t really a fan of; thinking about it, they were probably a bit much for a girl to find funny.

Did you have many things in common? Yeah we did actually, we’re both from just outside of Birmingham so we talked for quite a while about that.

What was the weirdest thing she told you? I can’t remember anything weird to be honest; she seems like a pretty normal girl.

What happened after you finished your meal? We stayed for a little bit, but she had work early in the morning so we left.

How did you say goodbye? I gave her a hug and said I’d add her on Facebook.

Would you look at her twice in a club? Erm I dunno- yeah maybe actually, because she has good taste in clothes and she’s got nice hair. Even though I don’t usually go for brunettes.

Potential sex partner percentage? Erm, 60%? What did she say?

Any  future plans? I’m definitely going to add her on Facebook and speak to her on there.

First impressions? He isn’t my usual type- a bit shorter than what I normally go for- but he has nice hair. I also like lads with glasses, which was a bonus.

Did the date get off to a flying start? Yeah, he was so friendly and really funny so he kept me laughing! [Laughs], we’re both from the same area of the country so it was nice to talk to someone who quite literally knew where I was coming from.

Best Features? Nice eyes and a very dry, witty sense of humour, which I love.

Any awkward moments? He did tell a couple of jokes which I didn’t understand, so that prompted some pity laughs.

Did you have many things in common? Yeah, loads actually! It turns out we actually grew up around twenty minutes away from one another, so we had a lot of shared memories about the places we’d been to as children. We also both like the gym so we talked a fair bit about that.

What was the weirdest thing he told you? He told me about his eventful weekend at a stag do in Leeds: some pretty weird things went on which I won’t repeat for fear of embarrassing him.

What happened after you finished your meal? We stayed for another drink, but I had to get up early for work so we said our goodbyes at Trof, as he lives in the City whereas I live in Fallowfield.

How did you say goodbye? A friendly hug [pauses and laughs]. What?! That was it!

So did you kiss? No, I’ve told you! A friendly hug.

Would you look twice at him in a club? Probably not, I was more attracted to his personality so initially there was no spark.

Any plans for the future? He said he would add me on Facebook so we could talk, so who knows? Maybe.