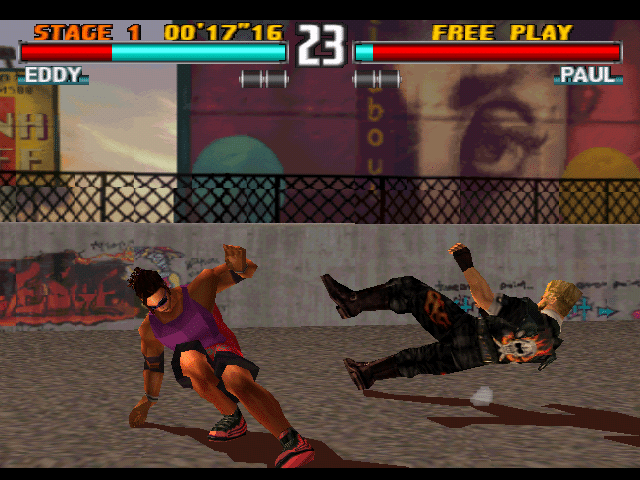 While there have been eight instalments in the Tekken franchise, it’s very likely that your lasting memory will be that of Tekken 3. The PS1’s Tekken 3 is widely considered to be the best title in the series, and one of the best beat ‘em ups of all time.  The fighting system had been expanded to include sidesteps, adding a new layer of depth to a previously simplistic fighter.

One of the great things about Tekken is how accessible it is for beginners, as a party game it’s hard to top. Characters like Eddy Gordo mean that a button-mashing beginner won’t be absolutely humiliated when a veteran Jin Kazama comes along.

Paul Phoenix was always my pick, his gravity defying hair always made the trash talk fun. Other iconic characters include Bruce Lee knock off Marshall (Oh I see what you did there) Law, robot samurai Yoshimitsu, and tiny dinosaur Gon. This was an eclectic cast of characters only matched by Street Fighter and Mortal Kombat in terms of memorability.

Being so widely played and iconic also lead to it crossing over into popular culture. In a memorable argument between Tim (Simon Pegg) and Daisy (Jessica Stevenson) on the TV show Spaced, each blow in the argument was matched with a blow on Tekken, when Daisy wins the Tekken voice over announces her victorious and she does the victory pose of Tekken fighter Nina Williams.

As a series Tekken is still going strong, with the latest entry Tekken Tag Tournament 2 remaining a popular fixture at arcades. Comparing old and new, one notices that the older Tekken’s feel like they’re taking place in slow motion. While many new characters have come along in the series, players are likely to still pick their favourites from Tekken 3 like Eddy Gordo, Paul Phoenix and Marshall Law.