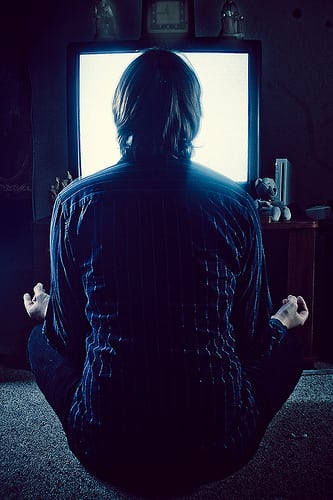 Confessions of a TV addict

My name’s Gwen and I’m addicted to TV. I watch anything and everything my laptop can stream. I like to think that I can stop at one episode but before I know it, its 3am and I’d gladly give up a limb just for another small screen hit.

Before I came to university I hadn’t encountered the joy of Putlocker and thought that Sockshare was a website on which people traded anecdotes about sock-puppets. Entering these sites can only be compared to entering another (dream) realm: I could now watch endless episodes – even whole series – of whatever I desired in the space of 24 hours and from the comfort of my bedroom. Dangerous.

Pilot episodes were much like first dates; there had to be a connection but I should be left yearning for more. If it didn’t fit the criteria or mood I was in, then I could just dump it and move on to the next. That’s right, I became a TV whore. This dreadful behaviour continued and soon enough I became entangled in a web of dramas and comedies. My evenings and weekends were spent in bed watching Mad Men, Desperate Housewives and Game of Thrones. Inevitably, I began sacking off lectures for the next fix. The thought of having to wait to find out whether or not Mike was actually dead was far more sickening than that of having to skip an hour of my degree (even though I knew that the attendance email was on its way).

It gets worse. My addiction started to spiral out of control and before long, I was even making excuses for not going out. Why should I torture myself at Sankey’s when all I truly needed was to find out how Ted met his wife? I reasoned.

I finally realised that I had a problem when I completed a Grey’s Anatomy marathon (for the third time) and looked in the mirror. What I saw was a greasy-haired, puffy, red eyed zombie. And it wasn’t just my appearance that was suffering; my room looked as though a tornado had just blown through it, scattering empty crisp packets and Pot Noodle cups all over the place. My personal relationships weren’t doing well either; I felt closer to the cast of 90210 than I did to my own friends, who were close to filing a missing person’s case.

I came to the conclusion that the binge-watching had to stop, but like every addict, I have relapsed. There are still times (after every episode of The Vampire Diaries) that I’d give up a family member to not have to wait another week for a new episode of my favourite series. My problem isn’t as severe as it was, but I still have a long road to recovery. I hear that the first step to overcoming the problem is admitting that you have one: I am a TV addict and I need help.