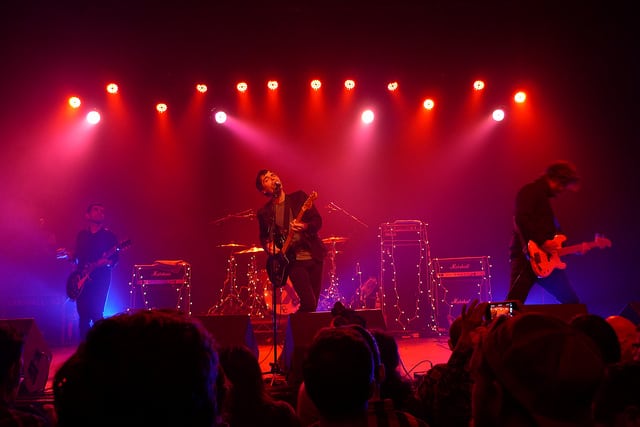 Live: Texas Is the Reason

“We’re not gonna come back out for an encore, we’re gonna play every song we know from start to finish and we’re all gonna be in it together.” You can forgive Garrett Klahn for his bluntness; Texas Is the Reason haven’t got much more time to waste. Tonight’s show, if we’re to take the band at their word, is to be their penultimate; once it’s over, only the following evening’s performance at London’s Electric Ballroom will stand between them and extinction.

Texas Is the Reason are one of those curiosities that rock music throws up from time to time, an outfit with a genuinely enigmatic back story; after producing a stellar debut, Do You Know Who You Are?, in 1996, they courted a host of major labels and looked as if they had the world at their feet. The following year, the pressure of the impending move to the big leagues had taken a serious toll. Relationships within the band deteriorated quickly and a sudden split followed; leaving that one-full length album, a handful of songs intended for the aborted follow-up and their first EP as their only recorded output.  Compared to some of their contemporaries in what would come to be categorised as the American emo scene of the mid-nineties – Sunny Day Real Estate and The Promise Ring spring to mind – Texas Is the Reason seem like the era’s great nearly men.

That said, Do You Know Who You Are? is arguably the most influential record to emerge from that period, and it’s that resonance, nearly twenty years on, that has kept the band in a position to sell out rooms across Europe for this final run of dates. They arrive right on time tonight, with the album’s instrumental title track filtering through the PA. It’s a fitting introduction, if only because that guitar tone, so typical of those nineties emo bands, absolutely screams nostalgia.

If you’ve seen Mad Men, you’ll know that the word ‘nostalgia’ apparently means ‘the pain from an old wound’, but the atmosphere tonight is largely celebratory. A mid-set show of hands suggests at least half the audience are hearing these songs live for the first time, and it’s a delight to report the band more than did them justice. The musicianship is pretty tight by any standards, but this is a group that have played a tiny number of shows over the past sixteen years – quite frankly, they’ve no right to sound this sharp. When it’s loud, it’s very loud – there’s real bite in the guitars on opener ‘Back and to the Left’ and ‘The Magic Bullet Theory’  – but the more reflective moments are pitched near-perfectly, and pack the heavier emotional punch – ‘Nickel Wound’ and “our take on a love song”, ‘Blue Boy’, are the standouts in that regard.

I’ll put my neck on the line here, and say that I honestly believe these are the last shows Texas Is the Reason will ever play. The tour’s promotional material was vehement to the point of protesting too much, with continued reference to the group’s ‘last waltz’ and even the tickets for tonight’s show reading “LAST EVER LIVE SHOWS!”, but the real evidence is in the body language. Frontman Klahn is a beacon of intensity throughout. You get the impression that the sheer gravity of the fact that he’ll only play these songs once more after tonight has only just hit him. On guitar, Norm Arenas strikes the kind of balance that defines the sentiment surrounding the band’s impending conclusion – his playing is frenetic, impassioned, but his demeanour largely reflects that of the crowd; a mixture of joy and astonishment at the fact that this is actually happening.

It’s so rare to actually get to bear witness to a show like this – where you know, with each song that goes by, that there’s a career terminus creeping ever nearer – and there’s no place to hide by the time the traditional closer, the Twin Peaks-referencing ‘A Jack with One Eye’, rolls around. As promised, there’s no encore, and Klahn implores the crowd – wholly appreciative, but largely static to this point – to make the most of this last chance to lose themselves. As the final screeches of feedback ring out, there’s an arresting, and very genuine, mutual appreciation between crowd and band; the emotional investment in the music clearly still remains a two-way street, all these years later. “Hold onto your friends,” Klahn urges, if Texas Is the Reason themselves hadn’t managed that feat over the past decade or so, we’d have missed out on something very special tonight.