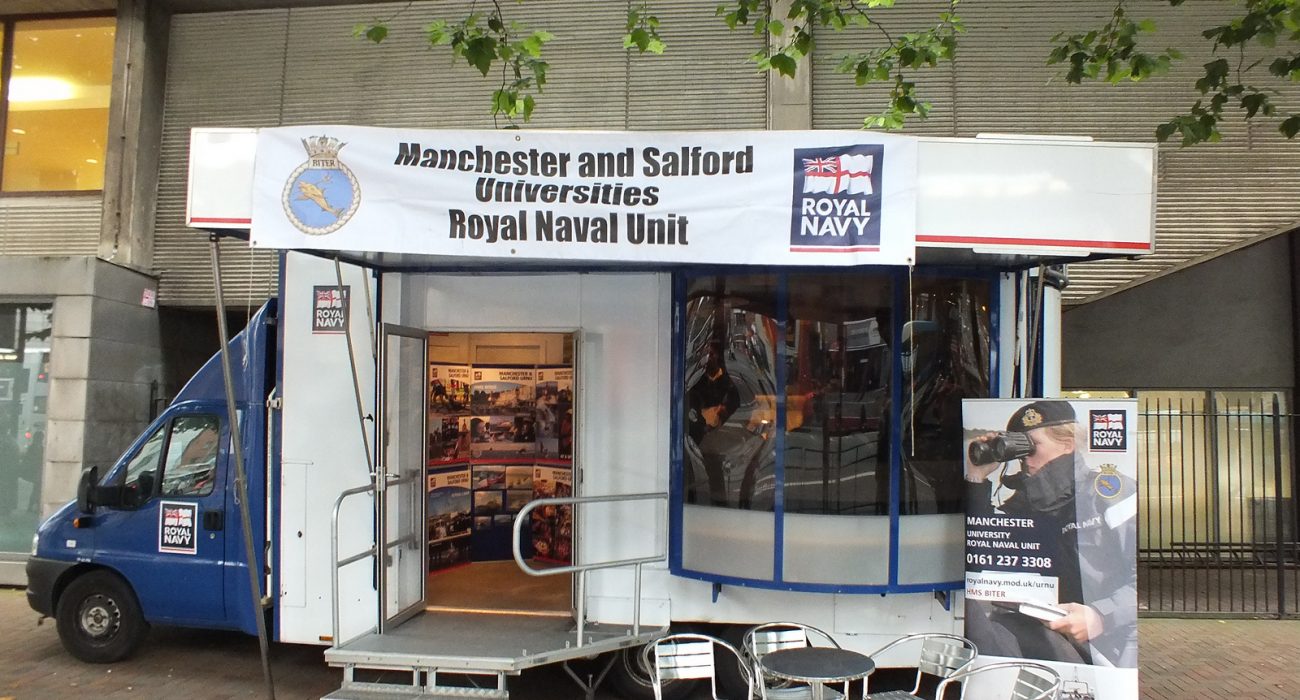 The positioning of the URNU van, pictured here, led to disputes with the Students' Union. Photo: Cil Barnett-Neefs

‘Unwelcoming’ Navy had Council permission to be outside Union

Manchester University Royal Navy Unit had Council permission to occupy the space they were ejected from during Welcome Week, it has emerged.

The passes cost the URNU £300 – £30 per day for each pass across the five days of Welcome Week. Parking dispensations and suspensions allow vehicles to park in areas where they otherwise would not have been permitted.

Part of the conditions of the passes being issued was the understanding that the URNU van would be parked as close to the Union building as possible, a council spokesperson told The Mancunion.

This was to ensure foot traffic in the area – where Oxford Road joins Lime Grove – was not blocked.

“We had been to the council planning enforcement officer months ago and asked permission,” said Lieutenant Commander Louis Gardner of the Royal Navy.

“We asked exactly who owned that little spot of land, the council stated that they owned it, and we actually paid the council a considerable amount of money to park there.”

The URNU were in possession of the valid paperwork on Monday morning – but were still asked to move.

Lieutenant Commander Gardner said, “Initially, what looked like an undergraduate who worked for the Union came out, and then I showed my pass, that I had a permit to actually be there.

“She went away and got [a Union staff member], who came out and said that everything the council said was wrong.”

Grace Skelton, General Secretary for the Students’ Union Exec Team, said in a statement, “there was a large Royal Navy mobile unit on Union property.

“It is the norm for external organisations to pay the Union a sum of money to operate on its premises, this hadn’t been the case.”

After being approached by a Union staff member, Lieutenant Commander Gardner then tried to reach the parking council official via telephone, but she was on leave.

The decision to move was made “to keep peace with the Union”, he said. “I said ‘look, we’re not here to annoy anyone at all, that’s not what we’re here for.’

“It was felt by the exec team that the highly visible presence of the armed forces large mobile unit directly outside the Students’ Union, may look like an affiliation and would make some students feel uncomfortable,” a statement from the Exec Team said.

“They were therefore asked to move from directly outside the Students’ Union and were subsequently relocated on the main University campus.”