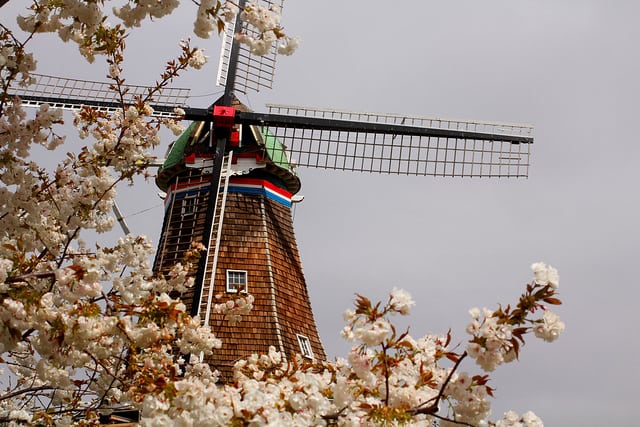 Down in the Dutch

Holland’s countryside is surprisingly well-designed for a couple of unprepared bums falling out of the ferry on a Sunday afternoon, armed with little more than bikes and a few euros.

The little towns are admittedly crap – Hoek van Holland, where we were deposited, exists as a gateway to the beach with tourist supplies and slightly shabby seafood restaurants, and is completely shut on a Sunday. The beach towns, long strips of cloned beach bars with thin music playing from their wet terraces, can be described as none other than grim. Maassluis, the next town along the shipping canal, is just concrete and plastic low-rise blocks squatting on the outskirts of Rotterdam, separated by scrubland that’s not profitable enough for concrete and plastic low-rise yet. Everywhere was closed, and our plans to buy any sort of map were scuppered. One lonesome store sold us strong beer and some sad vegetables, providing us with some little comfort for the evening, at least.

Once you’re out of these towns, however, the countryside (as far as the term applies) is abundant – separate cycle paths follow every single road and waterway, keeping you away from traffic, and there are maps and signposts at every junction, making it mercifully difficult to get lost. Since every part of this area was reclaimed from the sea, the land is mercilessly organised. Every waterway and wood is geometric, and the little villages, and the massive gateways to the megafarms (kilometres of greenhouse greying out the map) are immaculate and are patrolled and pruned by carefully-groomed goats, sheep or rabbits. The megafarms generously supplement our sad vegetables with fresh-scrumped corn-on-the-cob.

Finding places to sleep is a challenge in such meticulously organised land. We spent one night in a seemingly abandoned building site on the outskirts of grey Maassluis, nested inside a pile of long concrete pipes and watching the bright lights of tankers sliding along the shipping canal outside. In the morning, woken by the sounds of workers in hi-vis vests and diggers outside our pipes, we ghosted quickly away, crawling through pipes and undergrowth along with the sewer rats.

But the best place to sleep on a cycle tour of the Netherlands is, of course, the beach. Secluded spots in dunes are perfect for your tent. Make a fire by the sea, watch the sunset, relax and even have a smoke. But be sure to make a fire – the kids with Land Rovers roaring along the dark coastline won’t spot you otherwise (it was a narrow escape).