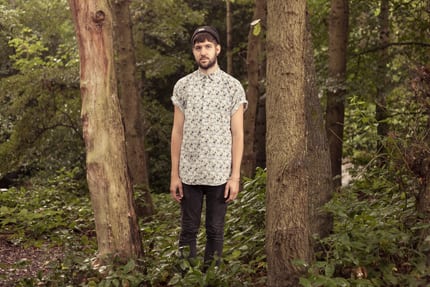 Undoubtedly one of the most promising young talents in the Drum and Bass scene today, the Mancunion recently gave Med School talent Etherwood aka Woody, a whopping 9/10 for his self-titled debut album. In anticipation for his set at Hospitality at The Warehouse Project, we caught up with Etherwood to discuss production techniques, Eastern samples and his diverse live set.

Although often praised for his consistency in delivering beautiful beats and heartfelt melodies, Etherwood is keen to denounce the labelling of his ‘signature sound’. “It’s always a tough thing to comment on. I hear words like ‘chilled’ and ‘atmospheric’ but that’s all pretty subjective really. I tend to use a lot of keys and guitar over synths and plugins, which I suppose contributes to a more live and acoustic sound.” However, there’s no denying album ‘Etherwood’ showcases his distinct style. “It certainly captures a particular ‘mood’ I think. I wanted to put a stamp on my style as a producer and hopefully I’ve achieved that with this debut.”

In fact, Etherwood seems to have stormed electronic music form nowhere as 2013’s producer to watch. “As soon as I heard that Tony Colman aka London Elektricity had been listening to my tracks and liked them, I was really stunned. I’ve always loved Hospital Records and so having a debut release on Med School was a massive milestone.”

“My creative process since the signing has developed substantially, it’s always developing. Experimentation is extremely important to me and the track ‘Unfolding’ which appeared on New Blood 013 was something a little different from me. The reception it had was really overwhelming which definitely instilled a confidence to be able to explore certain sounds and move away from a comfort zone.”

It is this determination to push boundaries that has created such a moving debut. Woody explains how most songs are written on the guitar or tend to sprout from a piano driven part. ‘We Are Ever Changing’ is the best example of this. “‘We Are Ever Changing’ has an Eastern vibe to it. My girlfriend features on the vocals and I incorporated some Indian flute samples that I found on my hard drive and fitted perfectly. It’s ace when you stumble across something that works so well.“

This experimental ethos also led to new production techniques. “I’d tended to use really long reverb on pretty much everything. So I experimented by using some reverse reverb and panning to keep each song individual. It’s fairly subtle but makes a huge difference to the overall vibe.”

Collaborations on the album produce something special as lyrical meaning builds upon the complexities of Etherwood’s production. He elaborates, “it’s always great working in the studio with vocalists. You can bounce ideas off each other and come up with something perfect. In fact I wrote ‘Falling Out Of Consciousness’ with Georgia Yates and Bev Lee Harling in mind, which features both vocals on the same track “– a pretty unusual approach for drum & bass.

However, although seemingly effortless to producing the highest quality music, Woody stays humble in describing obstacles in producing the album. “’Weightless’ was the hardest track to write” he explains. “The hardest part was allowing the drums and bass to sit alongside the piano part without becoming too overpowering. It went through a lot different stages before settling where it did.”

Similarly, collaboration with fellow Hospital hitter Nu:Tone on ‘Shattered’ “started out as a kind of amen/jungly thing with a long stretched vocal sample. It was all a bit messy. Up steps Dan Nu:Tone and really nailed it, perfecting it in his studio. Having a fresh take on it really helped.”

Looking towards the future, Woody seems hopeful for future projects. “I’m back in the studio, working on new material and the album has created a real momentum in terms of productivity” he explains as new projects look like they’ll be breaking new ground. “I love using strings in the studio. They create instant atmosphere that you just can’t find with pads or synths. I hope with future projects I’ll be able to record or play live with a full orchestra.”

Forever looking to new influences, his set at Hospitality WHP will touch upon a vast array of genres in typical Etherwood style. “My sets are usually fairly diverse, moving from liquid rollers to deep techy tunes and chucking in some half time tracks to keep things interesting” he describes. “I’m looking forward to dropping a few tunes from the LP to see how well they translate in a live context too. I’ve never been to Warehouse Project before so I really can’t wait to play!”

You can catch Etherwood’s set at Hospitality at WHP by grabbing your ticket HERE.