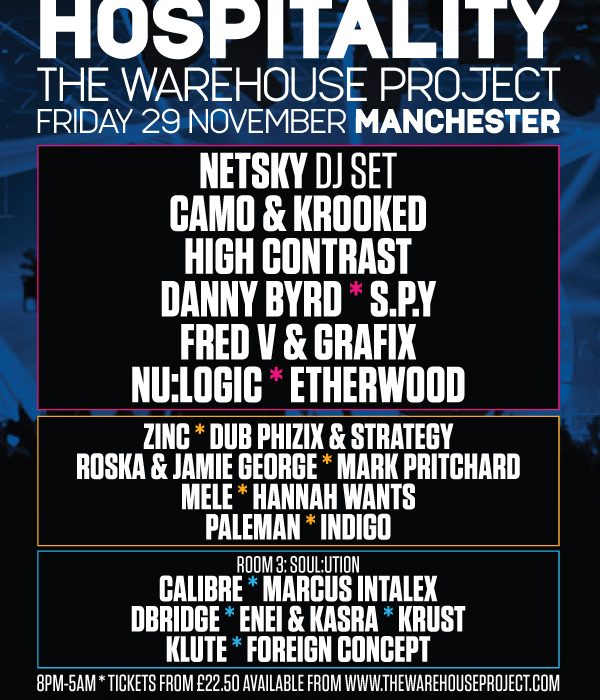 Or rather too little cash… However, as the world’s leading drum & bass imprint with a roster of artists from Netsky to High Contrast, the Hospital family are the most successful in drum & bass history and will be joining us in full on the 29th November at Warehouse Project. Normally touring the globe with Hospitalitys travelling from Poland to the edges of Canada, there are few opportunities to see such Electronic royalty on our University doorstep.

Headlining is none other than the mighty Netsky, fresh off the back of summer successes such as the first ever drum & bass act to perform on the main stage at London’s Lovebox festival whilst Austrian superduo Camo & Krooked, will be dropping some of their freshest releases from new album ‘Zeitgeist’ that will bring a funky spin to Room One. (Online will have vid link to a Zeitgeist track).

The mélange of acts presented in Rooms Two and Three are similarly unique in showcasing some of today’s rawest talent. The likes of Hannah Wants, Paleman and Indigo will be bringing their unique flavor to Room Two, whilst in Room Three, Manchester’s own Soul:ution crew will be curating and introducing acts such as include the elusive and enigmatic figure that is Calibre. Just scratching on the surface of the astounding line-up of talent presented on the 29th, this is one of the few WHP’s you really won’t want to miss.