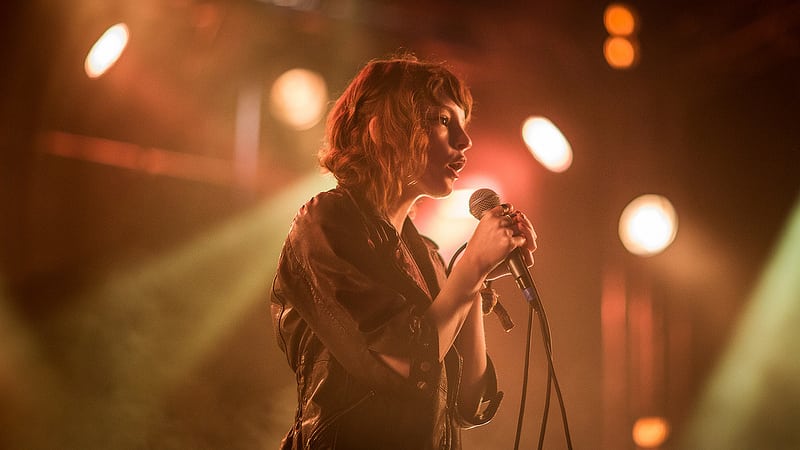 Following the release of their album The Bones of What You Believe, CHVRCHES have embarked on a tour of the UK. Having recently performed for both Live lounge and Boiler Room the crowd are eagerly anticipating their arrival. Tension builds throughout the opening set of THUMPERS, who sadly lack the energy of the bands (inc. Pull Tiger Tail) that they hail from. There is something there, but they need time before they find their niche in the limelight.

Tonight that light belongs to CHVRCHES. From the opening track ‘We Sink’, it’s clear that they have the music down, a genuine worry when it comes to electro bands performing live. From the small talk between that and their next song ‘Gun’ singer Lauren Mayberry reveals she is suffering from a cold and apologises for the state of her voice. But in the best possible way her apology falls on deaf ears because all the crowd hears are the songs they came to hear, sung and performed even better than on their album. ‘Science and Vision’ stands out as the strongest, and darkest song of the set.

They thank the crowd for coming to their largest UK headline show to date, which might explain why they seem so uncomfortable on the stage. Despite great fidelity to their sound, they feel much too static and formulaic in their movements. Over half of the movement onstage comes from Martin Doherty as he attempts to dance, but heavy synths don’t lend themselves to the same sort of stage antics as a guitar. When he comes up to take over the vocals for ‘Under the Tide’ his erratic skipping across the stage works the crowd up into a frenzy, just in time for an encore of a Whitney Housten cover and lead single ‘The Mother We Share’.