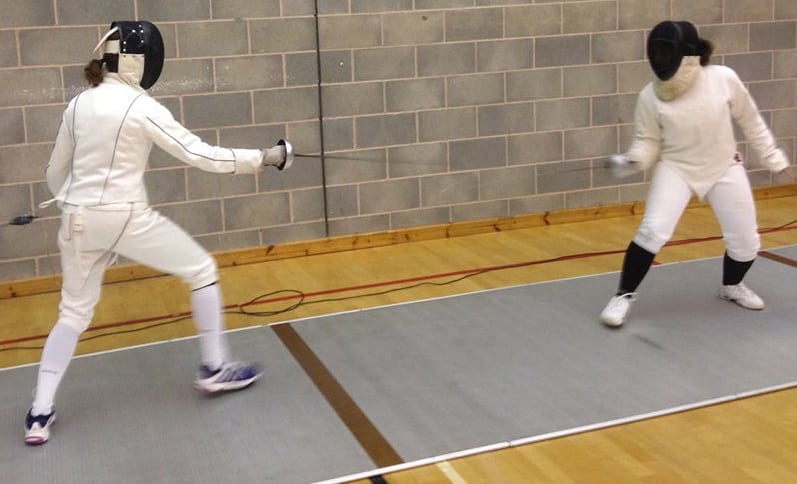 Sugden Centre’s Hall C rang with cries of “Stick ‘em with the pointy end!” on Wednesday afternoon when Manchester Women’s 1st Team faced off against a steely Sheffield side. Even though Sheffield’s team featured a member of the Northern Ireland national squad, and Manchester were missing two members of their squad, the home-side owned the piste to slash their way to victory. This now leaves the Manchester Women’s fencing team undefeated in the BUCS league.

The afternoon’s fencing occurred in three phases. In the opening Epée round, competitors target their opponent’s entire body, having to hit them with the point of their blade (á la Game of Thrones) to score. Here, it swiftly became clear Sheffield were advantaged by the fact one of their number’s tall height lent her impressive reach. Her opponents were forced to lunge further than usual, leaving themselves exposed to her blade. But Manchester overcame this, emerging with 45 points to Sheffield’s 38.

This was followed by the Foil round, in which the confusing ‘right of way’ rule applies: should both fencers land a blow simultaneously, the point goes to the competitor identified as the ‘attacker’. Simple in theory, but in practice, rapid bursts of parries and lunges meant even the referees struggled to tell what was going on and baffled us as spectators.

Trailing 39-41 before the final Foil match, Manchester needed a strong display from Jennifer Schofield if they were to finish the round on top – and she didn’t let us down. Despite having to tape-up her footwear, Schofield’s mastery with the Foil won her six successive points in a devastating comeback. Her lunging was consistently impressive all afternoon, knee almost dropping to the floor, giving her incredible reach and speed.

With the scores at 90-79 overall, Manchester needed just 35 points in the final round, that of the Sabre, to win. This round easily provides the most adrenaline as all parts of the sword are used, competitors lamping one another into submission. One of Sheffield’s number was shown to favour the Sabre, as she consistently boasted throughout the afternoon, relentlessly chasing opponents across the piste in a vicious 15-point comeback that suddenly made a Manchester victory uncertain. Enter Nicole Rajan. Her performance in the penultimate bout brought Manchester the points they so desperately needed. All that was left then was for Jennifer to face Sheffield’s aggressive ‘Sabruese’. This final match turned into a sabre master-class that brought the overall score to 135-121 to Manchester.

All three Mancunian fencers performed at a consistently high level, and Women’s Captain Nicole was keen to stress that the afternoon’s victory arose from a team effort. “This was the hardest match of the season so far,” she acknowledged as Manchester celebrated their win, “but we have a really strong team.” Even with the absence of two of its members.