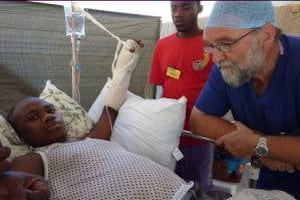 Professor Anthony Redmond had previously led a team of surgeons following the earthquake in Haiti in 2010. Photo: University of Manchester

A professor from the University of Manchester is leading a medical team going to the Philippines to help those affected by the recent typhoon.

“The first thing we will be doing is surgery on untreated wounds that may have already become infected or certainly to prevent them becoming infected,” said Professor Redmond. “Then we will be looking at the other range of conditions that present to us.”

The 12 strong team was approved for deployment by Britain’s International Development Secretary Justine Greening after the Philippines Department of Health sent a direct request. They are part of the UK’s £10 million relief operation for the region following the disaster.

Professor Redmond has had 25 years of experience in leading British medical teams in disaster zones. He has worked as part of response teams helping those affected by conflicts, natural disasters and major emergencies all over the world. This includes his work in 2010 when, following the Haitian earthquake, when he led a team of surgeons in providing emergency medicine and surgery with the UK Non-Government Organisation Merlin.

The official death toll from Typhoon Haiyan currently stands at over 2,300 but local officials and aid workers fear that it could rise significantly. The Filipino government currently puts the number of those affected by the typhoon at just over 8 million, however the UN Office for the Co-ordination of Humanitarian Affairs (OCHA) says that 11.3 million people are in need of food, as well as access to healthcare, education and livelihoods.