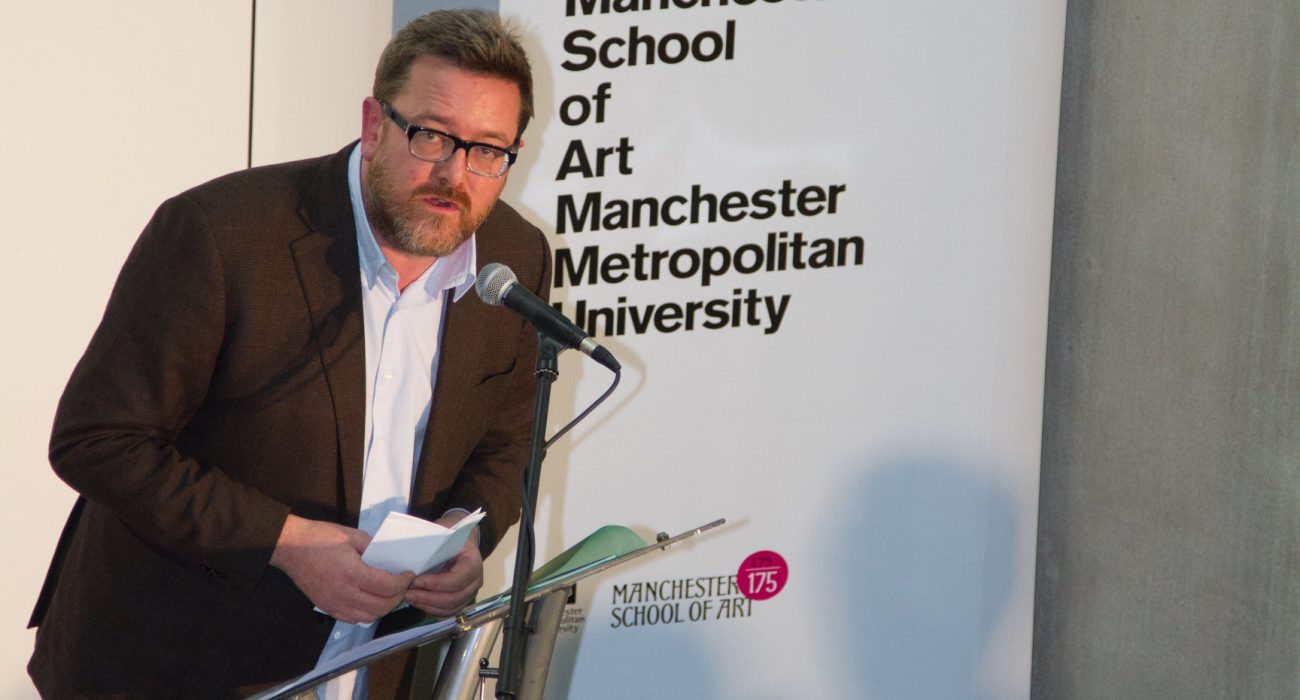 BRIT award winner Garvey looks at home behind a podium with a microphone. Photo: Kat Dibbits

Garvey, who was awarded an honorary degree by the University last year, said he accepted the invite because “the measure of a community is how it treats its arts.”

“When arts funding is so scarce and MMU is investing £34m, it makes me proud to be a Mancunian,” said Garvey.

“I think the arts are a barometer of a city’s spiritual and moral health.”

Garvey was joined by property developer Tom Bloxham MBE, graphic designer Malcolm Garrett, and Director and CEO of Cornerhouse Dave Moutrey for the opening of the ‘Benzie Building’ last Monday, on the School’s 175th anniversary.

The building is named after outgoing chair of governors Alan Benzie, who also spoke at the event. Benzie was instrumental in securing funding for the building, which is England’s first municipal art school.

Starting life as the Manchester School of Design in 1838, the school provided, for a period in 1880, the only higher education offered to women. Eventually, the school joined with Manchester Polytechnic in 1978 and was later absorbed by Manchester Metropolitan University.

David Threlfall, best known for playing Frank in Channel 4’s ‘Shameless’, called the new Benzie building “a wonderful place to try out your artistic endeavours” when he spoke via video link at the event.

Manchester City Council Leader Sir Richard Leese said the new building is “quite revolutionary” and spoke of the School being “one of the city’s great institutions.” Sir Richard also spoke of the need for more acknowledgment of the arts as “economic drivers” and “improving the quality of life”.

Also appearing via video was animator Brian Cosgrove, who met friend Mark Hall at the original Manchester Regional College of Art and went on to form Cosgrove Hall Films – producing such classic cartoons as Count Duckula and Danger Mouse. Cosgrove spoke fondly of his time studying in Manchester, praising the feeling of “being among artists” and “understanding what art was”.

The Benzie Building is now open, and can be found on MMU’s main All Saints campus.