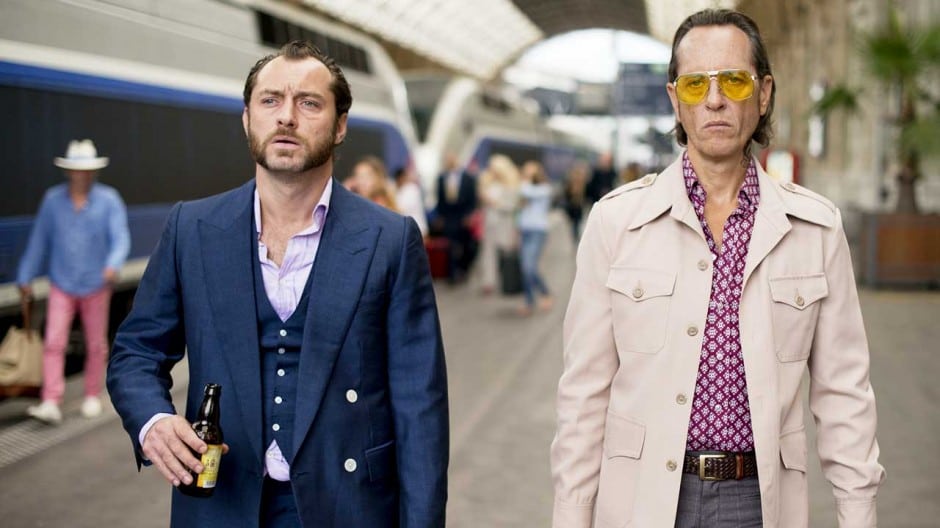 ‘’Crazy night, last night. Dickie lost a glove and everything.’’

Jude Law spent a summer ‘saying yes’ to every substance and snack that came his way to prepare himself for the role of titular Dom Hemingway; he had to work hard to look that bad. Law went method and much to the shock of director Richard Shepard he even refused to wear ‘the sock’ while filming naked on the set of the London based gangster flick (‘Cock, Sock and Two Smoking Barrels’?)

The film begins with foul mouthed, epithet spouting Dom receiving a sexual favour in prison whilst rather ironically pronouncing his masculinity and marvelling at his own genitalia. Dom has spent twelve years in prison after a safe-cracking job went wrong and he refused to testify against crime lord Evan Fontaine, in spite of his family’s pleading. His ignorance of current affairs (unaware smoking in pubs was banned, only rapper he knows is Afrikaa Bambataa) is indicative of the lack of visitors he received during his period of incarceration. Once free, Dom seeks out underworld contact- and only friend – Dickie (Richard E. Grant). A meeting is arranged with the dangerous Mr. Fontaine, (Demian Bichir) who is very much in Dom’s debt- something the incorrigible Dom intends to capitalise on.

Dom Hemmingway is a film of two halves: the first is a stylishly shot character study of a broken man who thinks he’s still on top, while the fast paced script squeezes in plenty of outlandish, hilarious and surreal profanities. The second half devolves into a bizarrely soppy and upbeat redemption tale, as if Love Actually’s Richard Curtis was shipped in to replace director Richard Shepard. Over acting, cat loving gangsters and an unforgiveable coincidental encounter (which seemed for certain to be a dream sequence) will bore you silly.

Jude Law’s performance as sleaze-bag Dom is interesting, a world away from his prudish turn in last year’s Anna Karenina. His silver- tongued slurs and geezerish faux-confidence make him feel like some kind of Russell Brand/Danny Dyer hybrid. Emilia Clarke is wasted in a limited role as Dom’s distrustful daughter and Richard E. Grant –(who should get more work) exists only to facilitate Dom’s soliloquising.

Including yours truly, the first public screening of Dom Hemingway in Manchester had just five attendees, which does not bode well for its box office takings. The tiny audience is actually rather fitting of the man himself; he will put on a show so long as there’s one person watching. In conclusion, Jude Law is pretty good but you should save your money and see Gravity, The Counsellor or Don Qui Gon- Jon instead.