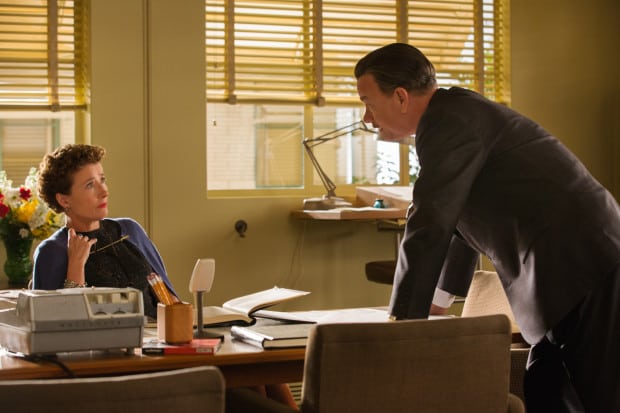 So the Tom Hanks season of goodwill continues. He’s already saved his crew from some frankly unfriendly pirates in the excellent, Captain Phillips, and did a pretty good job of Saving Private Ryan a few years back, but does he save Mr Banks from the clutches of his protective creator, P.L Travers (Emma Thompson)? Well as it turns out it’s Travers herself, or rather Emma Thompson, who ends up Saving Mr Banks and stealing the show.

Saving Mr Banks is the story of Walt Disney’s (Hanks) valiant attempt to get P.L Travers to agree to give him the film rights to her beloved, Mary Poppins, a book, it is revealed inspired by her own sad childhood relationship with her loving but failing father (Colin Farrell). As a result of the amount of screen time dedicated to depicting Travers’ childhood growing up in Australia, it’s little surprise that the character of Disney becomes an almost secondary one. But that doesn’t stop Hanks from ensuring that he makes the most of his limited screen time, and imbuing Disney with a charm, a child-like enthusiasm and all the other qualities you’d hope the real life Walt possessed.

After all if a film about Walt Disney is made by the Walt Disney Company, it should come as little surprise that this treatment of the man is very much the ‘authorised’ version. So no allusions to his well documented anti-semitism or any other of the more unsavoury aspects of his life.

But those omissions not withstanding, and a slightly ploddy first half hour, Saving Mr Banks really hits it’s stride when the real conflict between Travers, deeply protective towards her characters, and the earnest attempts of the film’s songwriters (Jason Schwartzman and B. J. Novak) to please her, come to fruition. The scenes where Thompson gets to really show off Travers’ prickly nature are the most enjoyable and at times laugh out loud funny, and coupled with the quieter scenes with her driver, Ralph (Paul Giamatti), you feel at times that Saving Mr Banks may have struck an excellent balance.

However, a slightly contrived conflict between Disney and Travers in the final act, just as she begins to finally start enjoying herself, is a frustrating reminder that the filmmakers have taken a healthy dose of dramatic license in order to facilitate a surprise visit by Disney to Travers’ London home, where he convinces her to finally sign over the rights and she happily sobs through the film’s premiere. In reality she famously loathed the film. An unfortunate fact which could undermine the entire premise, but the strength of Thompson’s and Hank’s performances means it is a mere distraction from an otherwise enjoyable tale.