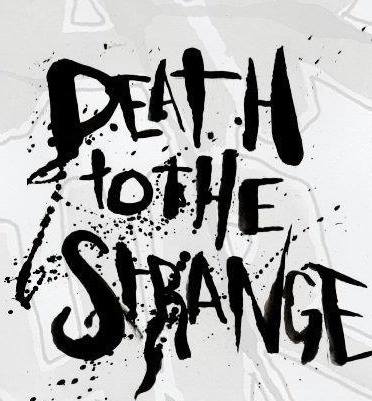 Interview: Death to the Strange

A five piece band that is signed by a Manchester-based independent record label, Death to the Strange is certainly not an ordinary band to overlook. Earning themselves a limited edition vinyl release and some high profile support slots- such as with Gomez and James Walsh- the band is inspired by many legends in the music industry such as The Smiths, The Beatles, The Stone Roses, Oasis, Floyd, Radiohead, Dylan… not forgetting Grandad Jimmy of course! Currently finishing off the video to their next single ‘Openshaw Blues’ for early 2014, the band had only just finished filming their first official video ‘Sign On’ which was said to be a “laugh” as the band “really enjoyed being thrown into a position where we were out of our comfort zone.” Catching up with the lads, I found out that the inspiration of the official music video came from Emmerdale actor Jason Merrills who plays Declan. “He heard the song and said instantly he pictured a video to it. He contacted us and asked if we would be interested in him directing the video for ‘Sign On’ and we gladly obliged. It was great working with him he was so professional and was good to see him get a few of his friends involved as well such as Dominic Brunt (Paddy) and Sammy Winward (Katie Addyman).”

This is not the only notice the band have received. Death to the Strange even got a mention by Peter Hook from Joy Division when he was interviewed with Rolling Stone, to which Daniel Clarke (Vocalist and Guitarist) responded, “It’s nice to think someone that’s been through it all and about for years and is well respected as a musician is a fan of us and our music.”

These lads have clearly worked hard at their music to get themselves to this far. Rewinding to the start of their union, the lads revealed their heartwarming story of how they first met. “John was in a band called The Joint and I was in The Moods who are both still going and doing really well (check them out). He was their guitarist at the time and as we got to know each other we both kind of got into drum n bass and would see each other at raves most weeks in Manchester in places like Phoenix and the Music Box (which are sadly missed). We talked a lot about our taste in music and soon became good friends. We were both up for starting a new project based around acoustic guitars and harmonies. It took a while for us to get together as we were both busy in our bands but eventually we did and from then on have worked with each other since.” After a long period of exchanging displays of songs and coming up with a set, the duo invited more musicians on board, building the band around the songs. “It just so happens that all 5 members of the band now are great instrumentalists and we are all best of mates,” adds Clarke.

He also revealed the history behind the curious name. It originated from a line that John (vocalist and guitarist) wrote: “bring fear on the weak and death to the strange” in addition to a book called Death to the Weird by Hunter S Thompson.

On the topic of revelation, Daniel Clarke spills the gossip on Paul Sewell (bassist) who is an apparent “animal in the bedroom” and “likes to talk about his experimental sex life quite a lot and he doesn’t mind going into detail even when nobody else wants to hear.” Nice, Paul.

After digging deeper, the band exposed some embarrassing moments on stage: “There have been a couple of incidents such as halfway through a gig one of our friends pulled my pants down so I’m stood there singing in my boxers” and “there was even a gig not too long ago when John had had one too many and he fell off the stage.” He adds, “Music is supposed to be enjoyed and that’s the main thing. If you can’t fall off the stage without finding it funny then you shouldn’t be in a band.”

As a final word, Clarke advises to young aspiring musicians that “If music becomes a chore then it might not be the thing for you or you may be in the wrong band etc. It is difficult to earn a living at music until you have mastered your art and been doing it for years so music has to be the passion and not money, so just keep at it, keep enjoying it and never ever give up living the dream!”

Death to the Strange are planning on releasing a second E.P soon, and a third E.P by April 2014! The five lads inform that they have a festival in France in March which they are “really looking forward to,” and are planning a mini tour of a few festivals in the big cities all over Europe.’ However if you are too ecstatic to wait for that, then check out their upcoming gigs…
Thu 19th Dec, The Crescent, Salford Xmas party
Sat 21st Dec, African Caribbean Centre, Glasgow w/Girobabies
Thu 26th Dec, Ethiad Stadium, Manchester