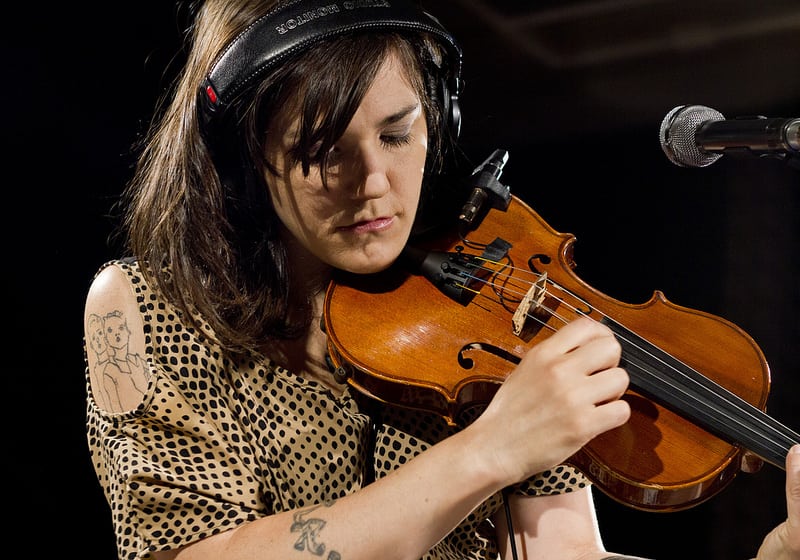 As the tables-and-chairs setup suggested on arrival at a near empty Ruby Lounge, Emily Wells’ quirky, atmospheric brand of hip hop lends itself to the quiet, attentive audience; a fact which was proved patently true by the end of the evening. Thankfully, when she appeared on stage, downcast, brooding, in some sort of hooded cape, the venue had filled out. The opening number, ‘Fire Song’, taken from her recent third album Mama was met with polite but enthusiastic applause.

As the show continued, Wells lost the cape and started to work the crowd. Granted, at times the furthest this stretched was to graciously accept some ill-conceived clapping during a gospel-inspired number, but the longer the night went on, the thinner the screen between audience and performer became and she was eventually telling us the stories behind songs, many of which were hypnotic and dramatic crescendos from a sparse bass line and a beat to a fully orchestrated soundscape, interspersed with her ghostly, delicate vocals and perceptive lyricism.

Her eclectic array of influences is evident in her seminal album The Symphonies, from which the song ‘Fair Thee Well & The Requiem Mix’ was a particular crowd pleaser. Indeed, when we caught her for a few words after the show she spoke of how her classical background influenced her music (Wells is a first-study violinist). However, her love of hip hop was also apparent as she covered The Notorious BIG’s ‘Juicy’ to the whooping of those who recognised it.

Wells’ smooth use of loop pads and pedals and her ability on a multitude of instruments was impressive too. She would add layer upon layer to create an almost orchestral texture at times. All this combined with her tantalizing vocals and all-round great musicianship meant for a memorable performance; a hidden gem on a quiet Sunday night.