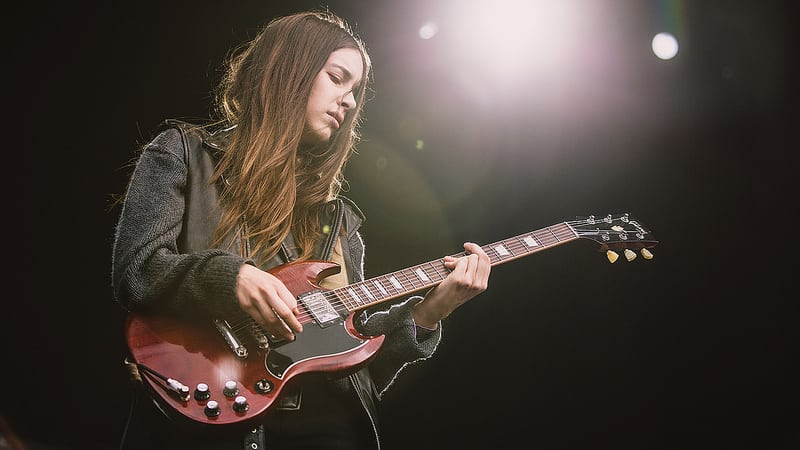 About halfway into their set, lead vocalist Danielle Haim pauses.  The Haim gig at the Ritz resides across the street from venue Gorilla, where fellow indie band Los Campesinos! is making an appearance.  According to Danielle, earlier in the night Haim received a tweet from the latter band capturing the winding line of people waiting to enter the venue- a twitter ‘fuck you’ from the more established band who is clearly competing for fans at their respective show.  Danielle is nonplussed, and asks the audience at the Ritz to put their hands up while she takes a picture of their sold-out show to tweet in response.

Haim don’t really need to stress about attracting fans to their shows these days.  They’ve already sold out their March show at the Academy in Manchester, and the Ritz is probably the smallest venue the band will see for quite some time.  Are they worth the hype?  Even those who don’t worship their full-length Days Are Gone would have to agree.  Their live show is energetic and entertaining, and the three sisters’ impressive mastery of multiple instruments as well as vocal harmony is enviable.  Even if you’ve never heard a single Haim song before (doubtful considering their widespread play from BBC Radio 1 to various TV soundtracks), their catchy yet unique brand of indie pop will find you hard-pressed not to be dancing along anyway.

Support comes from Saint Raymond (Nottingham-born Callum Burrows), who at eighteen already has secured this coveted support slot for Haim as well as festival play and an upcoming UK tour in March.  His songs are display a quietly confident presence, with upbeat and easy choruses indicative of a future of full crowds singing along.  Albeit slightly generic, his band provides a complementary warm-up for early gig-goers.