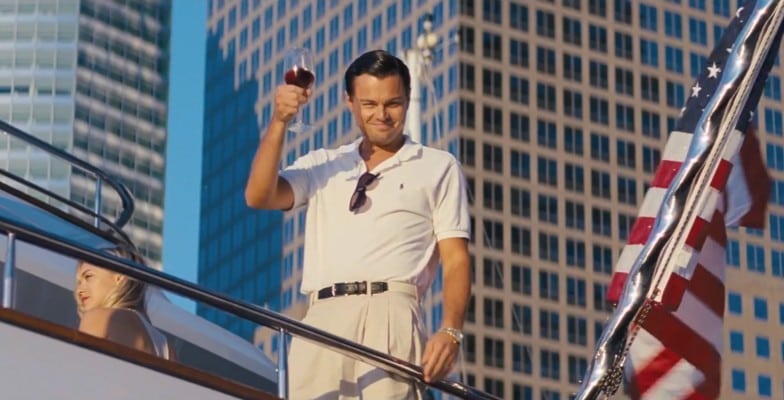 Worryingly for a film about a stockbroker who stole millions of dollars and ruined the lives of hundreds of people, The Wolf of Wall Street is also Scorsese’s most entertaining film in years. A particular scene, Belfort having discovered his phones have been tapped by the FBI, rushes to get home to stop his associate Donny (Jonah Hill) from incriminating them, but the extremely potent  Quaaludes he has taken makes the simple trip down the stairs near impossible. Dicaprio is agonisingly funny in this scene and throughout the film, delivering what is a career-best performance.

Some have even been critical of the film accusing it of glamorising the lifestyle of Belfort and his criminal cohorts, without ever acknowledging the disastrous impact their actions had of the ordinary people they’d swindled. However as the credits rolled, whilst nobody could deny that the film does not shy away from portraying all the riches enjoyed by those at the top, the overwhelming feeling is that of anger. Anger that after everything, Belfort still manages to land on his feet, and anger that nothing has really changed on Wall Street. This anger is clearly felt by Scorsese too, who doesn’t hold back, in the final half hour, from portraying the ugly side of Belfort’s fall from grace and the personal consequences of his actions.

Perhaps more of the film could have been dedicated to depicting Belfort finally having to answer for his crimes, but if that meant sacrificing some of the genuinely hilarious exchanges between Belfort and Donnie, or losing some of the great cameo appearances from the likes of Matthew McConaughey, Jean Dujardin, Rob Reiner and, er, Joanna Lumley (you read that correctly), then it’s better left unchanged