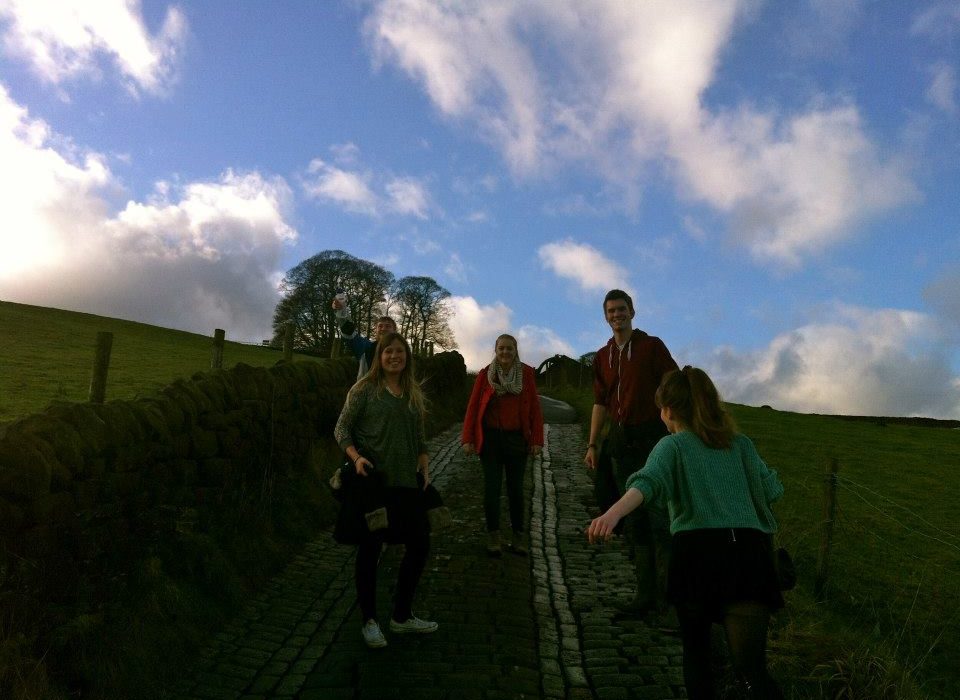 Nestled in a fold in the Pennines, Hebden Bridge is a town with an unusual blend of old-school Yorkshire and hippyish sensibilities. Like much of the North, Hebden flourished during and after the Industrial Revolution, but during the 1970s and 80s the town saw an influx of artists, writers, and activists. Today, the high street is largely made up of independent stores and chip shops, there are annual festivals for the arts and blues music, and it’s been voted the “fourth quirkiest place in the world.” The main draw for my friends and I, though, was the promise of a good old country walk. South Manchester in the bleak midwinter can feel like a bit of an urban wasteland, and of course, there’s nothing like revision to make you desperate for an adventure. The craggy hills of West Yorkshire are a world away from Fallowfield’s grey pavements and chicken shops, but Hebden Bridge is only 30-40 minutes from Manchester Victoria by train (£6.15 day return with a railcard). So in early January, we pull on our most sensible shoes and escape to the country.

We spend most of the train journey gaping out of the window at the wild green land flying past, like those WW2 child evacuees who’d never seen a cow before leaving London. Going somewhere with a gang of friends will always feel like a school trip, even when you’re all in your early twenties. As we zoom through a particularly pretty village, the boys even join in: “Ah, mate, that’s actually sick.” Upon our arrival in Hebden, we continue to impersonate people who have literally never experienced the countryside before, squeaking with joy at the sight of the town. Hebden Bridge is tremendously beautiful in its stout, Yorkshire sort of way, with yellowish stone houses, grey clouds swirling in a wide sky, and a canal lined with painted riverboats. It looks like it should be populated by lots of mysterious, grumpy nans. It looks like the setting of a really great children’s book.

We’ve barely taken three steps out of the train station before we are accosted by a stout old hippy. “Going up the hills?” she asks, giving Ruth’s white Converse a dark look. “Cos those aren’t walking shoes.” After buying giant chip butties from Crown’s (each weighing as much as a two-year-old child), we pop into the Hebden Bridge Visitor Centre, staffed by an elderly man who seems absolutely thrilled to see us. “What sort of walk are you after?” he beams, spreading a map across the counter. The walk to Hardcastle Crags is easy going: two miles, mainly flat. Or we could make the short but steep trip up to Heptonstall, where Sylvia Plath is buried. “Or perhaps you’re looking for something more strenuous?” Oh, we can handle strenuous, we assure him. We’re young, we’re sort of healthy, we have legs that move.

With a new map and an almost entirely unearned sense of confidence, we set off on the 10km climb to Stoodley Pike, a huge stone monument on the upper ridge of the Calder Valley. The climb is over a thousand feet, and feels it: the hillside is seriously steep, particularly at the beginning. In addition, the old hippy’s warning about impractical footwear turns out to be true. It’s wet and muddy, and while those of us wearing wellies can rediscover the joy of puddle-jumping, Ruth’s poor Converse get stuck in sludge on more than one occasion. But it’s a bright, blowy day, we’re in high spirits, and there’s something immensely satisfying about pausing for breath and seeing Hebden Bridge looking suddenly small and faraway at the bottom of the valley. Student life is spent largely indoors − on sofas or in lecture halls – and leisure time takes place in the dark, in a state of disarray, in black-walled clubs or sweaty house parties. Marching across the moors, jumping over stiles in the middle of green nowhere and giving one another piggybacks through puddles, feels like being seven years old again in the best possible way.

Particularly magical is the wooden shed we stumble across, a little way from a ramshackle farm. Inside is a cupboard of Pot Noodles and teabags, a freezer stocked with homemade ice cream and sausages, a kettle and a camping stove. A note reads, “Please help yourself to anything you like and leave something in the honesty box. Enjoy your walk!” Someone got robbed with an axe near my house recently, but out in the wilderness, somebody’s trusting strangers to pay reasonably for ice cream. It’s enough to make you weep.

When we reach Stoodley Pike, we discover that it has an inner spiral staircase leading up to a stone balcony, from which you can gaze across the Pennines. At the top of the ridge the wind is almost enough to lift you off your feet, but we linger before beginning the journey back to Hebden Bridge. The scramble back down to earth takes us through a wood, across stepping stones, and over a waterfall. As we reach Hebden Bridge, dusk is falling. That night, exhausted in the best possible way, I sleep better than I have in months.

It’s all too easy to get hermetically sealed in the student bubble, and you could shuttle up and down the Oxford Road for three years without ever venturing further afield. But every so often, try spending your Sunday up on the moors, not on a comedown. A change of scenery’s always good.