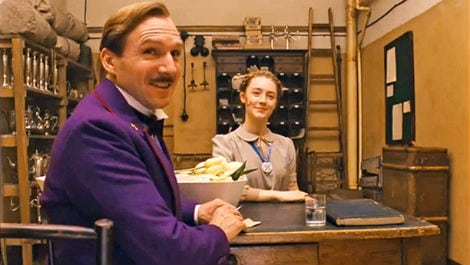 I envy any readers who are not already familiar with the delights of Wes Anderson movies – if The Grand Budapest Hotel is your first Anderson film, then you’ve got one hell of an introduction coming your way.

The film begins with an author (Tom Wilkinson) speaking into the camera about his views on storytelling. Earnest, yet laced with hilarity, this monologue sets the tone the entire film. We then cut to the writer as a younger man (Jude Law) on a visit to the titular hotel. Despite still having a certain beauty to it, the hotel is not in a good way – it is a sorry place, where guests dine alone and barely a sound can be heard. In the evening, the writer meets the hotel’s owner Zero Moustafa (F. Murray Abraham), who tells the story of the Grand Budapest’s former glory.

We go back in time once again to the 1930s, where we meet Gustave H. (Ralph Fiennes) – the hotel’s snobby but well-intentioned concierge – and Zero as a young man (Tony Revolori), employed at the hotel as a lobby boy. After the death of Madame D (Tilda Swinton) – a wealthy former-customer at the Grand Budapest – Gustave discovers that he has been bequeathed a highly coveted painting called Boy With Apple. This news does not go down well with Dmitri, the son of the deceased (a delightfully cartoonish Adrien Brody), who scoffs at the notion of Gustave coming into possession of this treasured – and not to mention valuable – work of art. Not long after he takes the painting back to the hotel with the help of Zero, Gustave is arrested on suspicion of the murder of Madame D.

As for what happens next, I shall not say. All I shall divulge is that the quest surrounding this desirable painting is a gleefully entertaining trip involving all manner of mayhem that could only have come out of Wes Anderson’s vibrant imagination.

The Grand Budapest Hotel is a display of Anderson’s quirky sense of humour at its finest. Those familiar with the director’s style will know that he brings a joy to movie watching that few other directors working today achieve –Quentin Tarantino and Edgar Wright are among the few other directors who make such unapologetically enjoyable films.

Anderson’s attention to detail with the film’s production design is also a valuable asset – each of the different time periods in which we see the hotel has its own distinctive look. When we move from the thematically bland yet still striking setting in the 1980s to the lush, colourful background in the 1930s, we feel the same nostalgia as the narrator of the story. There are many directors out there who could learn a lot from Anderson here.

One of the things that make the story skip along so giddily is the film’s fantastic cast and the eclectic range of characters they portray. Ralph Fiennes is pure comedy gold in what, in this writer’s opinion, is one of his best performances ever. Alongside him, we have Edward Norton as a police officer, Saoirse Ronan as a baker, Willem Dafoe as a shady assassin, as well as Bill Murray, Harvey Keitel, Jeff Goldblum and many more recognisable names. It’s hard to resist a cast like that.

Many critics have hailed The Grand Budapest Hotel as Anderson’s best film to date – I wholeheartedly agree with them. The director has never brought his distinctive vision to life with such energy before. The film’s comedic tone is utterly pitch-perfect and the world of the story is deliciously rich and full of flavour. It is the best film of 2014 so far – any film wanting to take this honour has a high bar to reach for.