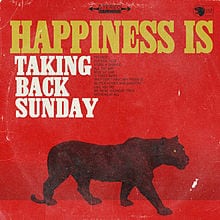 Album: Taking Back Sunday – Happiness Is

Taking Back Sunday returns with Happiness Is, the band’s follow-up to 2011’s  self-titled album.  As well as being their first album released on an indie record label (Hopeless) since 2004’s Where You Want To Be, this album appears to get back the emo pop punk roots that made them famous.  While this similarity of sounds will certainly make long time fans happy, the album doesn’t give the impression that Taking Back Sunday has simply resorted to this formulaic approach.  In fact, it feels somewhat like a homecoming, as track ‘Stood a Chance’ suggests with the lyric ‘you’re going forward looking back’.

While Adam Lazzara clearly hasn’t lost his propensity for angst-ridden lyrics, he almost seems to mock this stereotype in ‘They Don’t Have Any Friends’ when he sings “I keep my head down and hope for a hit / open the flood gates for all those smug little kids / it’s not their fault / they don’t have any friends / they can’t help themselves / undressing themselves / alone in their room / thinking that no one will ever love them”.  The album focuses on Lazzara’s attempt to cope with broken relationships and unfulfillment despite his success (‘I can’t believe how strange it is to be alive right now”).  Granted, lyrics such as “I’ll take you anywhere you want to go’ from ‘Beat Up Car’ aren’t exactly the most inventive or original in the book, and lot of the songs don’t seem that dissimilar from one another (one other complaint- there is genuinely no reason to have included instrumental introduction ‘Preface’, which encompasses about thirty seconds of forgettable noise).  However, Lazzara’s unmistakable voice and the collusion of instrumentals from all the original members of the band show that the method Taking Back Sunday has is still working, and the reminiscence the listener gets of past songs and albums is reassuring- they’ve still got it.