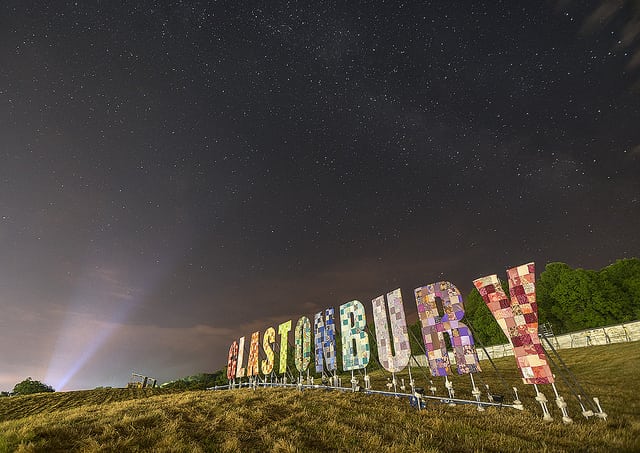 Having got tickets through the ruthlessly competitive ticketing process, I finally got the opportunity to go to what is perhaps the most well known festival in the world. 5 days was not nearly enough to explore all the hundreds of hidden gems the festival has to offer while trying to see all of the bands I had to come to see. Looking back, the festival has a completely unique atmosphere; artists are genuinely excited to play here, and collaborations or special guests are common; the annoying flags spread throughout the crowd blocking the TV cameras actually create a pretty cool atmosphere; and the nightlife simply never stops with the Beat Hotel, the silent disco and Shangri La running until the early hours. Its a festival that definitely needs to be experienced.

Wednesday involved waking up at 5am in order to get the direct train to Glastonbury from London and join the masses of people attending the festival. Even though we arrived at the site by 11, space in the most popular campsites was already starting to become scarce. The music doesn’t technically start until tomorrow, so we took the opportunity to explore. Watching the sun set over the sea of tents from the hill above The Park really was a treat.

Again, the music didn’t start properly until the evening, so we used the day to explore and to tuck into the warm crate of beer we had carried across the country with us. The hippies were already in full swing over at the healing fields, and browsing the menagerie of stalls was a fun way to kill a couple of hours. A friend had got wind of two secret sets over at the Williams Green stage. Hacking our way into the very busy tent, we were forced to endure an hour of whining from The 1975, who only succeeded in proving themselves to be utterly lame. Their inventively named songs such as ‘Chocolate’, ‘Sex’ and ‘Girls’ sums it up really.

Making up for the waste of air who had come before them, Metronomy came on stage and blew the crowd away. Their set had a heavy focus on the more electronic and dancey songs from their first albums, and the atmosphere in the tent was of pure excitement (the opposite of how it had been when I saw them recently at an academy show in Birmingham).

Friday arrived, and so did the torrential bursts of rain. Still running high from the secret Metronomy set we saw last night, we made sure we were at The Other Stage nice and early for the secret set marked in the program (which in 2011 had seen Radiohead take to the stage). Unfortunately it turned out to be the Kaiser Chiefs. Their lad rock definitely hasn’t aged well, but in their defence they managed to put on a good show, and were able to work a slightly hungover crowd into a relatively angry finger pointing mass. 80’s legends Blondie came on next. Debbie Harry and her boys definitely have still got it, and played a hit laden set including the likes of ‘Hanging on the Telephone’, ‘Atomic’, and ‘One Way or Another’ with an energy which surprised most of the audience.

Hip hop heroes De La Soul arrived on the main stage shortly after three o clock. Helped by the baking hot sun, their set was actually one of the liveliest of the whole weekend. Crystal Fighters once again did not disappoint over at the John Peel stage. Their shows are a unique cross between a gig and a rave, and their barmy mix of percussion instruments really was a treat for the ears. Torrential rain and thunder put a stop to the music festival wide for an hour. Slacker rockers Parquet Courts took to the Park stage after this was over and impressed the crowd with rapidly paced songs from their new album ‘Sunbathing Animal’, which thankfully matched up to the energy of second album ‘Light up Gold’.

Friday night headliners Arcade Fire played the most spectacular set of the weekend. The two hour show in which Arcade Fire showcased tracks spanning across their four albums was described by the band as “the biggest moment of [their] career”, this is surely the gig that promotes Arcade Fire from being just another alternative rock band into a household name. It was a real treat to hear songs from the Suburbs as well as from Reflektor, and the band’s passion and enthusiasm blew the 100,000 strong crowd away.

More rain arrived on Saturday, but our spirits were raised with a cheerful set from Circa Waves. Lana Del Rey made one of her few festival appearances on the hallowed Pyramid stage after lunch. After having read a few duff reviews of her previous performances, I’m happy to say that I was utterly blown away by her performance. Her voice was perfect, and while it was a rather static performance it more than made up for it in atmosphere.

Having read earlier that the HAIM sisters were playing a secret show over at the field of Avalon, we raced over after Lana’ s set ended to try and catch it. With security being tight on the numbers allowed inside we were lucky to squeeze in. We were even luckier however when after a few excellent songs, the four members of Mumford and Sons emerged onto the stage to play four rowdy cover songs with HAIM. A true Glastonbury moment of madness. Jack white, one of rock and rolls largest enigmas, played prior to Metallica’ s headline slot. Songs from his new album Lazaretto translated well, but he ultimately too much time was spent fiddling with amps and creating sonic mess. He played a couple of cracking White Stripes covers though.

Spurning the crock of shite that was Metallica, I headed to go and see surf psyche band MGMT play on one of the smaller stages. With the crowd only knowing first album ‘Oracular Spectacular’ the show was a little flat as a whole, but that didn’t stop big songs like ‘Electric Feel’, ‘Time to Pretend’ and ‘Alien Days’ being great to see live.

The Preatures and their crossover Fleetwood Mac/Blondie sound was an ample reason to get up and attempt to shake off the Sunday morning hangover. For a band who haven’t even recorded a debut album they sounded pretty impressive. Having missed The Kooks playing a secret set over at the John Peel stage, I made sure I was early for Bombay Bicycles set in the evening. Previous female vocalists Lucy Rose and Rae Morris joined the band on stage for their respective songs, and new material from So Long See You Tomorrow (especially ‘Feel’) sounded great.

Over at the Pyramid Stage, The Black Keys played a set to a ridiculously large sea of people. They proved to be the perfect band to wind down the weekend, and the slickness of their show made it easy to envisage them as future headliners one day.

Feeling a little burned out by this point, I mustered up all my remaining energy and saw Disclosure headline at the West Holts Stage. Having seen them play a couple of times I knew I was in for a treat. Their set was pretty seamless, and getting together all the original guest vocalists from the was a nice touch. If I had once criticism it would be that their set was a little sterile, but all in all it proved a great way to finish the weekend. Now it was time to leave the festival and rejoin normal society!