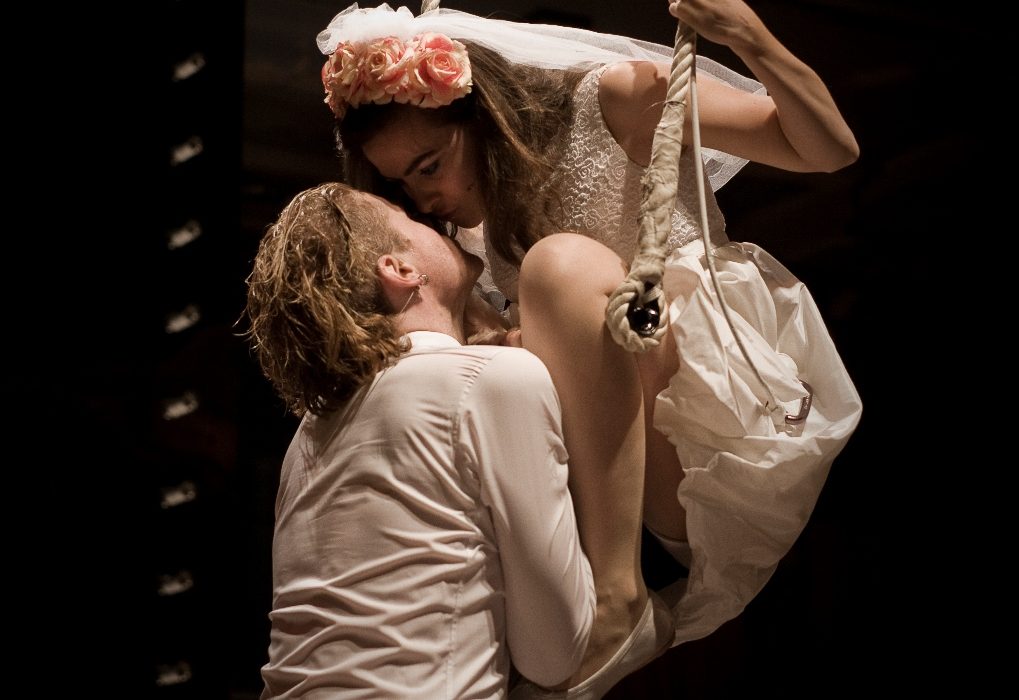 As I left HOME’s production of Romeo and Juliet, I was complaining to my friend Ellie, who accompanied me, that I did not know how to feel. We all know the classic Shakespeare story, and we all know the characters, on which so many of our modern love stories are based. However, I was still in dismay and, if you like, in complete and utter woe. I had completely adored director Walter Meierjohann’s production, staged in promenade at Manchester’s historic, and beautiful, Victoria Baths and every element of the interpretation seemed to fit, like an exquisite, star-crossed puzzle that was designed to entice the audience and forget the pains of standing for the majority of three hours.

The production was staged in 90s Eastern Europe, with nonchalant musicians narrating, cigarettes hanging from their lips, an interesting choice some may say as we discover our feuding families, The Capulets and The Montagues, bringing certain Godfather and This is England vibes, respectively. The bath houses themselves are already beautifully designed and there was little need for spectacular scenery and designer Ti Green achieved just the right level of interruption of the space, without overwhelming the action or the gorgeous glass and tile-work already in place. The highlight, without question, was the final performance room, as Juliet lay in her death-like state on a bronze-coloured cross covering the entirety of a pool, with candles and roses floating on the water around her, reflecting onto the glass ceiling above. As the audience made their way into this final space, the gasps of delight and astonishment said more than enough for Green’s achievements.

As with any show, it is truly the cast that makes, or breaks, a production and the cast assembled by Meierjohann were the true crowning glory. Stand out performances came from Rachel Atkins as Juliet’s mamma-italia nurse, Ncuti Gatwa as an outlandish and flamboyant Mercutio and Juliet herself, played by Sara Vickers, who managed to overcome the challenging task of giving Juliet a soul. Perhaps due to the character itself, it is common for many a Juliet to become overwhelmed with her innocence and unquestionable love for her Romeo. Vickers’ interpretation, however, created true meaning to her desire for love, and her anger toward her family as well as her desire to die were most definitely legitimate and believable.

So despite my love for the production, why my woes? After much thought and deliberation I have decided that it was our Romeo who caused me such confusion. “I hate him”, is all I could say to Ellie as we talked during the interval and I was, and still am, unsure if I do. Played by Alex Felton, the interpretation was that of a coke-addicted hipster, obsessed with singing in falsetto, who is going off the rails without any meaning in his life. I found Felton to be hugely self-indulgent as both character and actor, and was hoping it would pass as his love for Juliet blossomed, but it didn’t. Ideally, I would like to meet Felton to truly see how close to this Romeo he is, or not. If so, it is sad that our ‘hero’ would be played by someone so cocky with a desire only to show off; if not, his capability as an actor is truly immense. I’m going to hope for the latter, as it would be a shame for there to be only one weak link in the production which has given HOME a very exciting start on the Manchester arts scene.