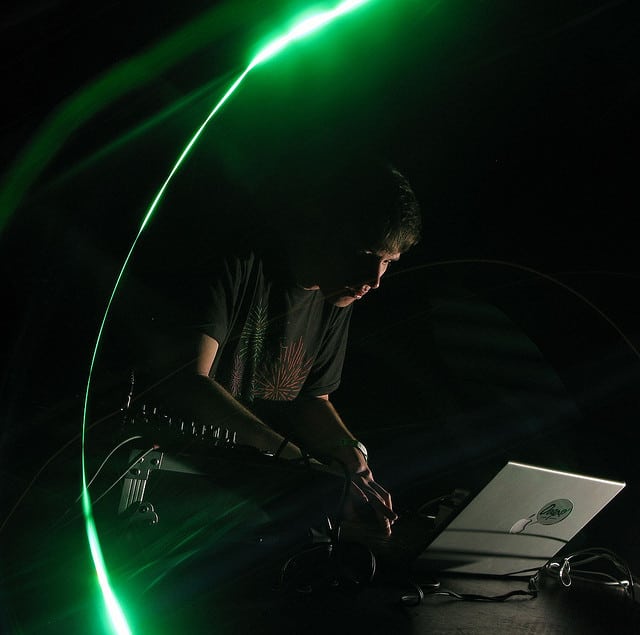 Club: Sounds Of The Near Future @ WHP

Sounds Of The Near Future is the premier night for forward thinking music in the Warehouse Project calendar. This is typified in the booking of Rustie and Hudson Mohawke with their futuristic, no-holds-barred production style.

The former has Room 1 bouncing already as I arrive. Rustie holds a special place in my heart with his debut Glass Swords being seminal to my developing of an interest in dance music; it’s always a delight to hear these songs out, with the likes of ‘Hover Traps’ and ‘After Light’ stirring emotions beyond just the desire to dance. Whilst I didn’t connect with follow up Green Language as much, the tracks go off in a club setting – and hearing a crowd scream along to Danny Brown’s rasping “I don’t give a shit, tell your bitch suck my dick” refrain on ‘Attak’ is a pretty special moment. The airing of PC Music honcho AG Cook’s ‘Beautiful’ is also fitting to the theme of sounds of the near future, with the divisive label spearheading an evolution in dance music of late.

Kaytranada is up next, opening on Kendrick’s ‘Bitch Don’t Kill My Vibe’, perhaps in recognition of the tough task he has in maintaining the energy Rustie instigated in the room. Ironically however, he does exactly what the song warns against with a set of slower hip hop beats.

If I had to place my faith in anyone to get things going again then it would be Hudson Mohakwe. Taking the baton from Kaytranada he opens atmospherically on fellow Warp Records signee Clark’s ‘Skyward Bruise/Descent’ before unleashing a set dominated by his own ferocious productions. ‘Thunder Bay’ and ‘Goooo’ incite a frenzy; ‘Cbat’ still sounds amazingly fresh; and those horns from ‘Chimes’ nearly blow the roof off Store Street.

That his set is only an hour long is the only blight – I find myself desperately hoping he’ll be able to manipulate the circumstance of daylight saving and play through his 1am-2am slot twice but, alas. There is time to fit in a number of tracks from collaborator Kanye West however which is greatly welcome, even if he doesn’t allow ‘Bound 2’ to play fully.

Moving into Room 2, Stones Throw Records boss Peanut Butter Wolf is showcasing the older side of hip hop, providing a highlight of the night by selecting Souls Of Mischief’s ‘93 ‘til Infinity’. Things get emotional when the visuals display images of the late DJ Rashad and MCs shout commemorations down the mic.

Finally, it’s up to Jackmaster and Oneman aka Can U Dance to close the night. The room is absolutely rammed, a stark contrast to the 5 people I joined to watch Jackmaster in here at 7pm on opening night, and they delight the crowd with a string of bangers. At risk of sounding like a killjoy, the set is a bit crowded with these sort of tracks. When you’re expecting classics the hype generated by hearing them is diminished, with greater effect coming when they’re tucked into a set as a curveball. That said, mixes such as ‘Erotic Discourse’ into ‘Pulse X’ are undeniably good fun, and Fix’s ‘Flash’ never fails to thrill.

With Rustie and Hudson Mohawke the standout acts and Jackmaster performing a strong set, Manchester hasn’t seen Glaswegian dominance like this since Celtic Park in November ‘06.