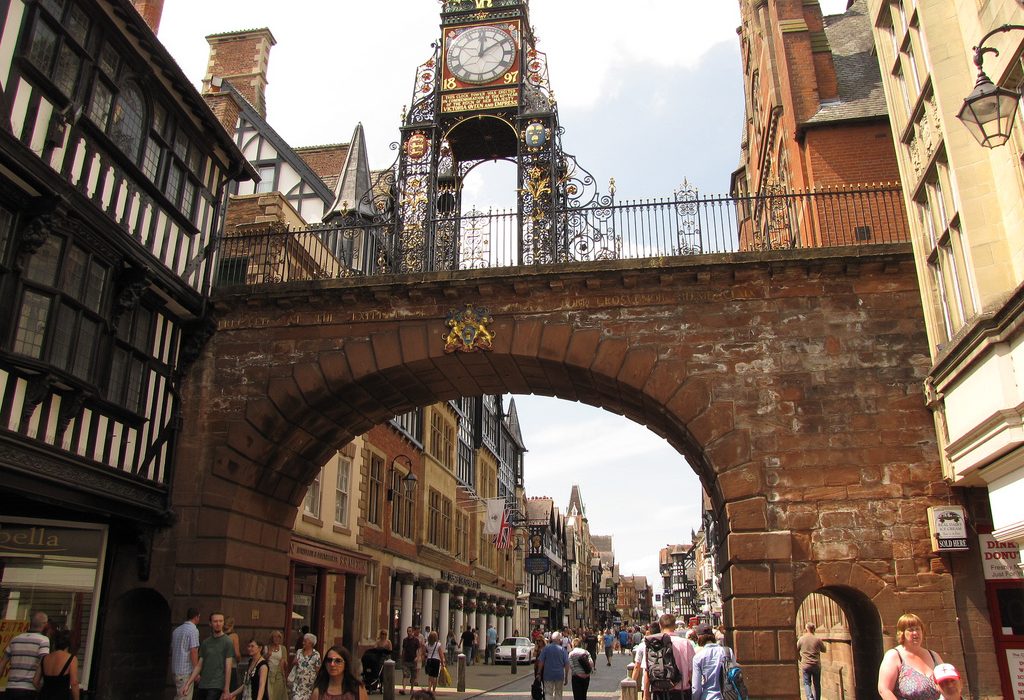 A photograph of the second most photographed clock in England. Photo: Friar's Balsam @Flickr

This week Robert was meant to venture into Moss Side. However, he chickened out so instead here’s a very brief guide to Manchester’s smaller, not so masculine, slightly southern companion, Chester. (It’s not as atrocious or exciting as Hollyoaks makes it look.)

When you leave Chester’s Railway station the first thing you realise is how empty it is. Then you see the Live Rooms which hosts acts such as The Smyths, and Dirty DC, as well as a range of middle-aged men and women who were once part of famous bands in the 80s and 90s. Then suddenly you’re in the centre and there are groups of tourists blocking your way taking photos of the Eastgate and Eastgate Clock, probably because their guidebook tells them it’s the second most photographed clock in England after Big Ben and that way they’re giving something back to the place they’re visiting. Then you’re down a street and it’s silent again and you probably pass a sex shop with two plastic mannequins handcuffed together.

If you’ve been to York, it looks like that, only smaller. There are lots of expensive, chain boutique shops which appear with an expectancy that is usually only reserved for McDonald’s in every former spa/market town in England. There are lots of too-small tea rooms selling many varieties of coffee and panini at shocking prices. You can even have a sightseeing tour of Chester on an open top bus, although you could walk it just as quickly, and it would probably be raining.

At night time muscular men wearing smart shirts go out with women wearing faces full of makeup and beige and salmon dresses which are moulded to their skin. They go to expensive bars, which you could frequent anywhere, and take lots of pictures and sometimes dance to one song. Or they go to one of the three nightclubs, such as Rosie’s, where celebrities like Joel Corry DJ et al show off their bronzed abs and tweet about “buzzing for #Chester 2nite!” because it’s just another “big start to the weekend!”

Whatever you do, don’t miss the Halloween party though; last year two girls dressed as the Twin Towers and won £150 worth of shopping vouchers (it wasn’t really worth it). In Chester the possibilities are infinite: Cruise, yet another nightclub, offers you six different areas to experience: Manhattan, Bangkok, the Mediterranean and even more in one building… in North West England.

If it gets a bit overwhelming there’s no need to panic. Liverpool is just a £4.60 return trip away if you’ve got a railcard and it’s not much more than £10 to get a return trip to Chester’s big bro if you book a week in advance. My top tip is save the money and just get a single out of there: the university may be the sixth safest in the UK (whilst Manchester is frequently named the worst for crime outside of London) but all in all, YOLO has never seemed so necessary.