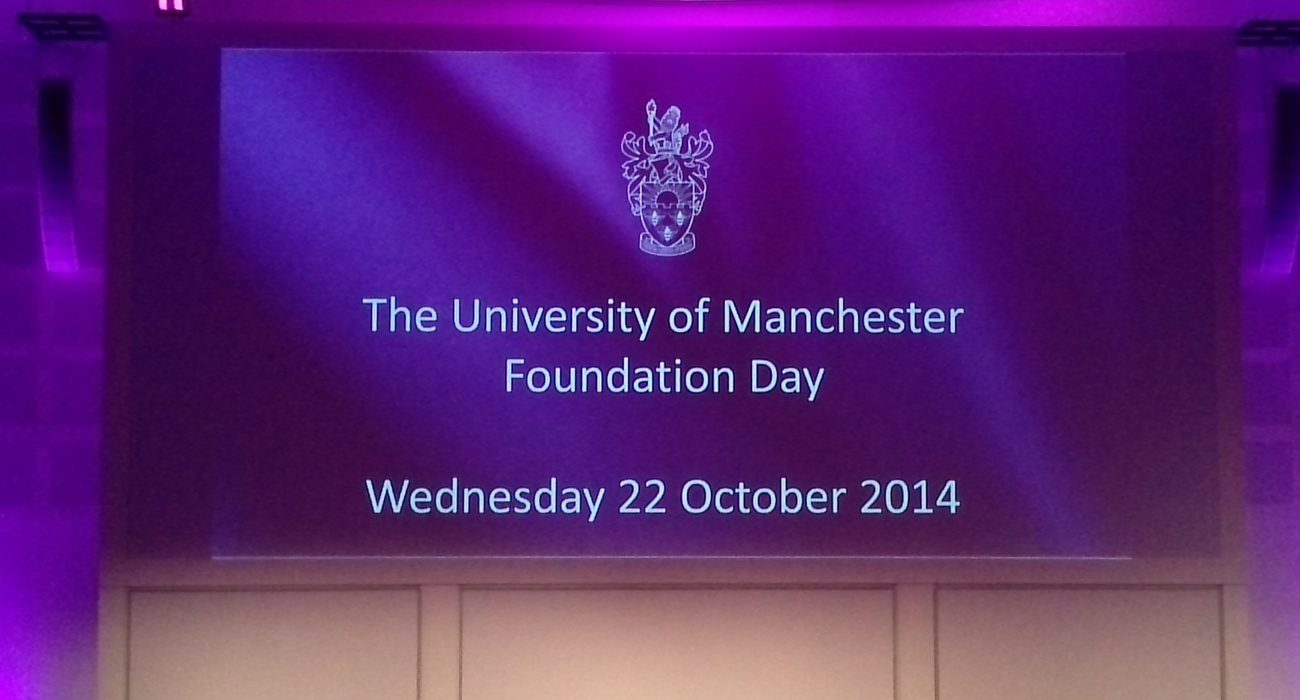 Professor Jeanette Winterson could easily have been talking about herself rather than the city in which she was born. Her passionate, fiery and strongly thought-provoking Foundation Day Lecture was fitting of a place that has always encouraged boldness and self-assurance. A Mancunian by birth, but, based on this talk, also by spirit, mentality and values.

‘Manchester: from Gradgrind to Graphene’ was the name of the lecture. Two words, both beginning with the letter ‘g’—one that represents everything the city stands for, the other the complete opposite.

Prof. Winterson delivered a captivating talk, taking the audience on a whirlwind tour of the radical history of both the city and the university.

Prior to calling Professor Winterson to the stage, Dame Nancy Rothwell opened proceedings. She proudly spoke of how far the university has come since its formation in its current form ten years ago.

A short video followed, in which various members of the academic community here at Manchester spoke about what the university means to them. Professor Brian Cox described it as “a place where you can wander through knowledge.” “It’s progressive, egalitarian, humanistic and inventive,” said the Manchester-born Professor and TV personality Michael Wood.

Finally, it was Professor Winterson’s turn to take to the stage. She began by stating that she was going to time travel, “to see where we were, to think about where we are, and to imagine where we might be.”

Her first destination was the year 1824, the location being the Bridgewater Arms, a pub in the city centre. It was here that a meeting of a group of local businessmen resulted in the formation of a mechanics institute. It proved to be a huge success.

Prof. Winterson moved onto the next key moment in the University of Manchester’s history. It came in 1846, when a cotton merchant named John Owens left a sum of roughly £100000 to set up a college in his name. This college would have no religious affiliation, nor would it be exclusive to the very wealthy. No attention was paid to anyone’s place on the social ladder.

“That’s the Manchester egalitarian spirit at work,” stated Prof Winterson. But this wasn’t the first time such a thing had occurred in the city. Three centuries earlier, Manchester Grammar School had been founded on the same principles. Pupils were admitted based on their academic ability, regardless of their rank in society.

This is the Manchester way. In this university, and indeed this city, everyone is encouraged to learn. People are given the freedom to discover their own place in the world, rather than be told it.

Dreaming big is another Mancunian characteristic and Owens College epitomised this when they sought university status in the 1870s. They were widely mocked and ridiculed throughout the country for this, with The Times concluding that “anyone educated in Manchester would certainly be dull and probably vicious!”

Looking at where the University of Manchester is now, I think we can all afford a wry smile.

Then, it was time to bring the first titular ‘g’ word into the equation. Mr Thomas Gradgrind—the archetypal Dickensian villain. The notorious headmaster is the main antagonist in Charles Dickens’ tenth novel, Hard Times.

In the book, Gradgrind is a keen advocate of the factory-line model of education. He views his pupils as nothing more than pitchers that he can fill up with facts and statistics, then send out into the world to make money. In his eyes, finance comes first, and any form of imagination is a direct hindrance to this pursuit of profit.

Prof Winterson described him as a “reverse Rumpelstiltskin, spinning the reckless and unknown golden possibilities of his pupils into the same old useful straw.”

The ethos of Manchester couldn’t be further from the values and beliefs that Gradgrind tries to instil into his students. “Creativity is a way of life,” said Prof Winterson. “It’s the human condition.”

“Play is how every child starts in life and how every good idea is born.”

The second ‘g’ word was then introduced. Graphene—Manchester’s favourite and most famous super-material, which saw Professors Geim and Novoselov awarded the 2010 Nobel Prize in Physics.

Unlike Gradgrind, graphene is a perfect illustration of Mancunian ingenuity and inventiveness. It was discovered, by Geim and Novoselov’s own admission, as a result of “mucking around in a lab.” It was a triumph for imagination. A triumph for curiosity. And a triumph for the values that define Manchester.

Perhaps the most important part of Manchester’s history was the Industrial Revolution, and this was the topic that Winterson turned to next. From an economic perspective, it transformed the city into the modern powerhouse that it is today. But in social terms, the effects weren’t quite so glorious.

“It made humans miserable in an entirely new way,” she explained, “by taking away their humanity.” People were simply viewed as hands that could operate machines. In Gradgrind’s eyes, a utopian paradise. The mills and factories propelled the city to the forefront of modern Britain, but repressed the iconic Mancunian spirit.

People worked for up to 14 hours a day, six days a week. There was no room for creativity or thinking, just the same procedure of mind-numbing activity in a bid to produce as much cotton as possible.

Charles Dickens had a love/hate relationship with Manchester. “That’s normal,” remarked Prof Winterson. He was both disgusted and mesmerised by the endless rows of mills, bellowing vapours out high above the city’s skyline.

Manchester is a city of firsts. The first true canal in England opened here in 1761. The first passenger railway terminal at Liverpool Road allowed workers to travel. The first steam-powered mill. The first free school. The first public library for scholars. The list goes on.

“We’re still carbon-based humans in a silicon world,” said Prof. Winterson. “And soon, a graphene world.” Moving back onto the second ‘g’ word, she said, “Manchester is on the cusp of a new identity. Graphene will alter the fortunes of this restless, changing city once again.”

It appears that a second Industrial Revolution is on its way. And what a revolution it promises to be.

Prof. Winterson then journeyed further back in time, to 1301, when the town received its charter. Even back then, Manchester was at the forefront of equality. Most medieval settlements had restrictions on upstart entrepreneurs, but not this town. Here, anyone was allowed to do business.

More of Manchester’s radical history was brought to the attention of the captivated audience. She spoke about the infamous Peterloo massacre of 1819, when Tory militia charged into a huge crowd of people demanding the reform of parliamentary representation, killing 15.

The creation of the Free Trade Hall, which, in the words of Prof. Winterson, is “the only building in England to be named after a principle,” was another important moment in the city’s rich history.

The Guardian was founded here, and the values that it still holds today remain synonymous with those of the city. “The Guardian has always been a campaigning newspaper,” she emphasised.

“Whatever your politics, you should be proud that Manchester, and only Manchester, has produced a world-class news media that has never been bought out or bought off.”

Perhaps the truest embodiment of the Mancunian spirit was displayed during the height of the slave trade in the United States. Manchester workers deeply opposed slavery, despite the fact that their living and working conditions during the Industrial Revolution were no better.

The mill owners weren’t particularly bothered about all this. Through their Gradgrind-tinted glasses, all that mattered was that they got their cotton. They weren’t true Mancunians though.

The real Mancunians were the workers. In 1862, they staged a huge anti-slavery demonstration at the Free Trade Hall. The protest struck a chord with our friends across the Atlantic. Lincoln himself wrote a letter to the people of Manchester, thanking them for their efforts.

Politics formed a key part of both the talk and the Q&A session that followed. At times it almost felt like a rally, with Professor Winterson delivering a passionate warning against austerity and the far-right. She spoke of her fear that her beloved North West might fall into the hands of UKIP and throughout the lecture she slipped in a few clever digs at the likes of Farage.

“We can’t give up on politics, especially not here, in Manchester, with our history,” she warned. “Manchester is a fighting town.”

As a native of a Labour stronghold, Professor Winterson didn’t hold back with her views of Conservatism. A few less than complimentary remarks about the Thatcher years were included in the lecture, most of them deliberately unsubtle.

There was a moment in the Q&A session where someone suggested that Manchester should identify itself with more capitalistic views, in addition to its traditional left-wing values. Her response was fiery, mesmerising and nothing short of majestic—it was almost a rallying cry for a new socialism.

Lastly, Professor Winterson spoke about the role of universities in Britain’s future. “Universities are places of enquiry,” she stated. “Universities do much more than supply the labour market with graduates.

“Universities are in the business of creating futures, all kinds of possible futures, through innovation and human capital.”

Her stirring words were a stark reminder of the university’s responsibility to encourage its students to think for themselves. “Politics is too important to be left to politicians,” she stated.

Professor Winterson concluded her outstanding talk by declaring that Manchester could and should be at the forefront, but only if it stuck to its core values. “Don’t let it just be about money,” she warned. “Let it be about values. Manchester’s always been about values and vision.”

I left the room proud to be studying at this great university and living in this great city. Although not a Mancunian by birth, I’d like to think that I share the beliefs and values that make this place so special.