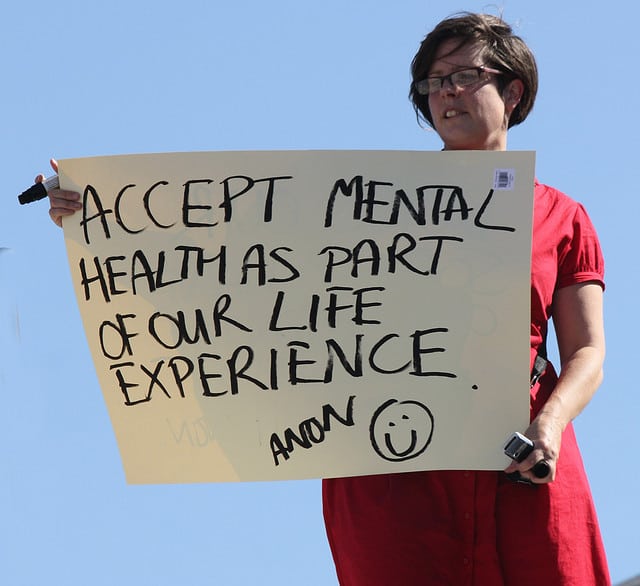 The familiarity of referring to mental illness only continues to defamiliarise its real-world effects. Photo: FeggyArt @ Flickr

“You are mental mate,” “I’m just so depressed lately,” “Sorry I rearranged your food cupboard—I have this things about tidiness.” Phrases like this are so ingrained in the rhetoric of the day to day that they are the norm. To be upset and describe yourself as depressed isn’t ever corrected. To incessantly fuss with the statement, “Oh, I’m a bit OCD, not properly though,” is apparently fine.

The problem is that it’s really not okay. The issue is that it serves to undermine the potential for real illnesses being diagnosed as a throw away excuse or explanations for a piece of behaviour.

Mental illness is still, despite its highly publicised sufferers, a taboo issue. Though maybe not taboo in everyday discussion, it is still very much taboo in the sense that to seek help for mental issues is looked on unfavourably.

The general use of discourse relating to mental illness in day-to-day exchanges simply serves to negate the importance of getting assistance for real mental illness.

Furthermore it serves to perpetuate the idea of mental illness as something to be kept under wraps, something with negative connotations. This is exactly the kind of stereotype campaigners and lobbyists are attempting to shake off.

Depressive illness is not analogous with being a bit sleepy; it is a physical condition, an irrefutable, factually supported, imbalance in the body. Being sad then, is not to be depressed. The negativity surrounding seeking medical support for a mental illness like this not only stems from popular discourse. Repressive societal attitudes to mental illness predate the changes of popular daily discourse.

The NHS must also take some responsibility. One in six patients who have sought treatment for mental illness will attempt suicide while awaiting help. It’s the equivalent of 55000 cancer patients a year finding their situation so helpless that they attempt suicide.

It’s true that there is clearly not a ‘parity of esteem’ between physical illness and mental illness. Similarly the legal status of many people classified as mentally ill serves to undermine the continued efforts to normalise not the language of mental illness, but the illnesses themselves.

In 2013, 263 children sectioned under the Mental Health Act were held in prison cells due to overcrowding in the correct facilities. The Health Select Committee has referred, on more than one occasion, to ‘serious and deeply ingrained problems’ in the approach to the treatment of sectioned children and adults.

When the institutions designated with dealing with issues of mental illness continually fail, not only does a person admitting to possible issues become taboo, it often becomes futile too.

Socially, it shouldn’t be considered a futile gesture to raise a medical issue to an institution tasked with treating its patients equally and effectively. In the case of an orthopaedic illness this is never the case. A broken leg is treated swiftly, and in the correct environment. The same should be true, but clearly is not true, of psychiatric illness.

What is true is that the number of patients diagnosed with mental illness has skyrocketed in recent years.

That said it is also true that very few patients were diagnosed with vitamin deficiency, or polio or cancer in the 1600s before they were classified. We wouldn’t deny any of these exist in the 21st century.

Medicine moves on and we learn more about the body. Discovering something now doesn’t mean it never existed; gravity, shockingly, existed before Newton spotted it. It means that civilizations before us dealt with it and carried on, but they also dealt with polio and carried on. Try suggesting doing that now. Did you get a frosty response? Thought so.

The understanding of the brain and the furthering of research into chemical imbalance and psychiatric illness is not something to be scoffed at as a 21st century illness. It’s a regressive attitude that we allow to prevail when we cultivate such ideas.

While once the mentally ill were feared and burnt as witches, we now prefer to deny them as being ill at all. Keep calm and carry on. Maybe it is time to develop some empathy. Or maybe these regressive attitudes and inability rationalise is within itself a type of madness. I’m sure it would be totally socially acceptable to label them mentally ill.

The continued ridiculing of mental illness, which has been cultivated societally and also by the failing of institutions, must be carefully considered. The further it is dehumanised, the further it slips into popular culture, the less seriously considered the issues become.

Be it through language, ’21 pictures people with OCD will love’ or television like The Big Bang Theory where Sheldon (an unlabelled autistic figure) is ridiculed for his illness. Everyday hundreds of you will walk past a lady standing by the gates of Owens Park and smirk. All of these things, if you really think about it, are such cruel things to do. It’s medieval in its outlook, laughing at otherness.

As long as the issue of mental illness is treated as such it will remain a taboo for those who suffer or think they suffer with the illness.

As long as jokes spread and normal language reinforces psychiatric illness as strange and unwanted, it will remain for many a dark secret, a dark secret to be suppressed and never fully dealt with.

So talk about mental health by all means, but if you’re going to talk about it, take it seriously.