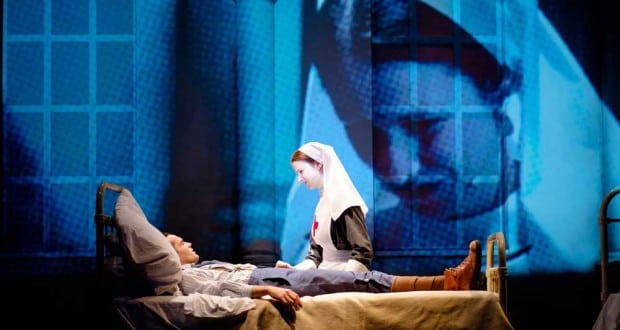 Review: A Farewell to Arms

The problem with the play is characterisation, or rather lack of it.

The play is a crescendo of distracting lights. Sentences from the novel flicker unnecessarily above the stage, emblazoned on a large banner by a projector. The actors spend most of the performance facing away from the audience. Their faces shown only on screens at the back of the stage with a jarring lag between hearing their voice and seeing their lips move. Set pieces are dramatic and epilepsy inducing but by being so fail to communicate the subtly of Hemingway’s message.

The play is sodden with unnecessary distractions and explosions of letters and lights. Rather than a touching Hemingway treaties on the dreadful nature of war, it could have been a dark Michael Bay spin off.

Italian is frequently spoken in the play (the novel is set in the Italian campaign), but when on a number of occasions subtitles either appear too early or too late to read and to an English audience the subtleties of Italian are impossible to convey, it seems like an unnecessarily avant-garde choice.

As someone who has read and loved the book, the play truly misses the point. As an audience member told me after the performance, “Hemingway would burn this place down if he saw this.”

The novel is not an empowering love story as the play tells it; the novel is condemnation of war. Yet you never feel this, the characters are bland and not even unlikable, they are simply unknowable. Their faces big and bluish projected out of synch with their dialogue, their frozen mannerism bizarrely marry with even the most powerfully passionate dialogue.

The play feels rushed, the characters make love, cry, and kill in the same hastily impassioned manner. The audience has little chance to feel the impact of their actions before words begin to flicker on the banner again or ‘off stage’ actors give laconic insights in the characters thoughts or someone moves the ever on stage hospital bed slightly to the left to signal a change of scene.

If the play had been King Lear, it would have been a masterpiece; exclaiming to the heavens in a fit of madness whilst lightning and thunder crackle around Lear would have been masterfully done.

However it is not a poetic epic. It is a subtle censure of war. It requires the audience to understand the characters to feel the full force of wars pernicious burden on them. It requires not being rushed. It requires actors who face the audience and express themselves.

Yet there were areas of greatness. I must commend the originality of ‘Imitating the Dog’ translation of Hemingway to stage and the beautiful music that informs the audience of the moment’s gravitas brilliantly. The end of the play is moving despite the overwhelming amounts of sound, light and colour.  The aesthetic design of the play was marvellous.

There are certain glimmers of promise, and it would be a lie to suggest ‘Imitating the Dog’ are untalented or not one of the most interesting and ambitious contemporary theatre companies. However in this instance the play let’s down its source material and does not communicate the powerful, emotionally fraught story that Hemingway penned.

Tags: A Farewell to Arms, Ernest Hemingway, review, The Lowry