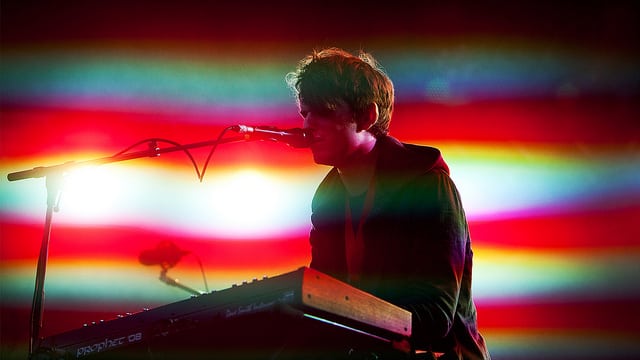 Alongside his outfit 1-800 Dinosaur, James Blake took over Manchester’s Warehouse Project to deliver a quite literally breath-taking set.

In anticipation, I gave Blake’s two albums a listen and admittedly I can’t say it ever caught my attention, it’s great reading music, kinda nice to put on if you’re feeling a bit edgy, but want to relax. Frankly, I was fascinated at how James Blake and Overgrown were so critically acclaimed upon release. However, after seeing him live I understand the plaudits he received, justifiably so, his live set gives a whole other dimension to his sound.

Stepping out with a guitarist and a drummer, Blake sits at his keyboard and starts to twinkle and work his fingers round a looped sample, before layering on some synthed chords. The drummer leads the instrumentation, his percussive snare fills give the opener a trap-kind of feel. Gradual energy builds, the looping vocal sample and beat climb to an inexplicable drop that literally reverberated through my nose and ribcage and probably altered my heart-rate. ‘Air & Lack Thereof’ is reminiscent of something Hudson Mohawke might’ve produced, the bass pulsates frantically  throughout my entire body and the sound is so very far from the sombre night I’d grown to believe I was in for.

Thankfully, the dub and bass-heavy songs such as ‘CMYK’ and ‘Voyeur’ are completely contrasted by the solemn ‘Measurements’ and ‘Retrograde’ in a setlist that is eerie and experimental, and sits well with the cool kids of Manchester.

‘Wilhelm Scream’ is the penultimate track and the clincher for me. Blake’s falsetto is tremendous and the support from the guitarist and the drummer are equally matched in a constructed and atmospheric escalation to a near-hypnotic climax. It’s minimalist and intricate, and reminiscent of the vibe of the set.

Blake’s sound is unique and unlike any electronic music I’ve heard before. Detached yet sincere and honest, the intimacy on record is given a new life by his live performance. Whilst his sound becomes somewhat tedious in the downtempo parts, I don’t think my heart-rate could’ve lasted one and a half hours of face-numbing bass.