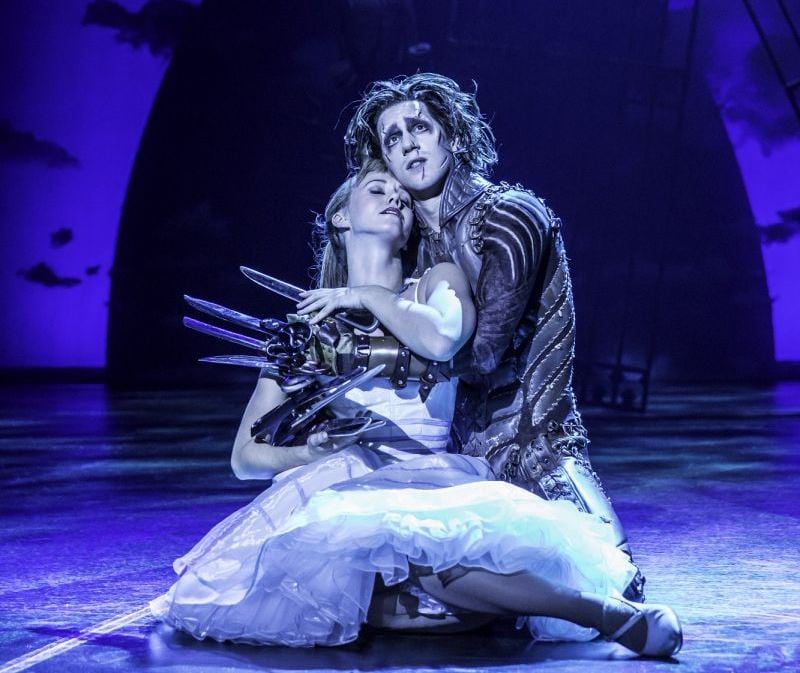 It is hard to believe that a story of such creativity like Edward Scissorhands was an original script, especially in our time, in which most films are book adaptation or sequels. The film was based on a drawing of Tim Burton, who worked closely with Caroline Thompson to invent a modern fairy tale inspired by stories such as Frankenstein and Pinocchio. Matthew Bourne, the director of the stage adaptation felt himself instantly drawn to the film when he saw it for the first time and especially Danny Elfman’s score made him think of dance choreographies and inspired him to present Edward Scissorhands on stage.

The production is a visual masterpiece due to its intricate stage design and a plot that draws a line between the original screenplay by introducing a back story of Edward’s creation. His creator based him on his son that was struck by lightning while holding a scissor, making him a creation based on grief. It is essentially a story of acceptance. Edward, being left to his own devices, has to overcome the prejudices against his scissor hands and has to show that he is worth a place in society by proving his usefulness only to realise that a wrong accusation can destroy his reputation.

During the Q and A session after the performance, Matthew Bourne emphasised the importance of creating a unique approach and he wondered if it is possible to separate Johnny Depp’s character from the original Edward Scissorhands. They definitely succeeded in giving the production their own touch. The biggest contrast between the film and stage performance was that it was set in the 1950s, which worked very well because the mindset of America’s suburbia was even more conservative at that time and an outcast surely harder to accept in society.
The highlights of the evening were the ice dance and the final scene.

Anyone familiar with the film will remember the hauntingly beautiful music accompanying the realisation of mutual love between Edward and Kim while kissing in the snow in front of an ice figure. The stage production managed to portray Tim Burton’s mysterious atmosphere perfectly in those scenes, which was sometimes missing throughout the play. The costumes were a definite strength of the production, especially the dancers who played bushes and were unrecognisably covered in green leaves, leaving the audience perplexed about their ability to see through their shrubby costumes.

Dominic North’s strong performance managed to communicate Edward’s naivety and motoric inability with subtle, but effective mimicry. As a lost boy in a world of gossip and barbecues, he gains the sympathy of the Bogg family, treating him like a son and he later experiences strong emotions towards their daughter Kim, charmingly portrayed by Katy Lowenhoff. Dominic North was inspired by Buster Keaton, Charlie Chaplin and other silent film stars in order to make Edward a tragic figure without uttering a word and he clearly succeeded. The appreciation for his performance grew more when he admitted the difficulty of dancing with the heavy scissors gloves on his hands, which seemed entirely effortless throughout the evening.

He furthermore worked very closely with Caroline Thompson and Tim Burton had to give him green light because Edward Scissorhands is a very personal story to him since he based the character on his childhood; he always felt out of place and like an outsider. Tim Burton even came to one of the performances and apparently liked it. The film composer Danny Elfman initially wanted to write more music for the stage production, but he was too occupied with other projects. It was then decided that the successful composer Terry Davies would be responsible for additional scores, making up half of the music onstage.

The ending of the performance offered a surprising conclusion very different from the film and the actors were given a standing ovation while snow poured down from the ceilings upon the delighted audience. The dance production certainly lived up to the expectations and many questions were asked in the Q and A session, demonstrating the interest it evoked in the viewers. It was a wonderful spectacle of a modern fairy tale with its own touch that enchanted young and old at the Lowry.