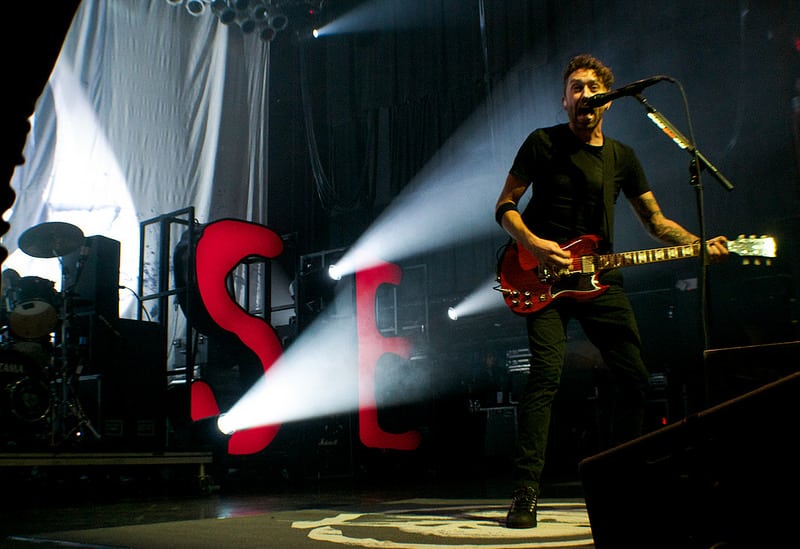 As with any Punk rock show in Manchester, there are some things which one can expect to see as standard. Mosh pits, fast riffs and even faster drumming to name but a few. But what one doesn’t always expect to see is a well-choreographed stage show with high production values, something which Rise Against delivered last Saturday to a packed-out O2 Apollo.

Currently touring with their new album The Black Market, the Chicago four-piece spent no time in getting right into the swing of things, playing a collection of back catalogue hits which stand as a testament to their impact upon the punk rock scene over the past 15 years, before introducing several of their new tracks. Credit should also be given to lead singer Tim McIlrath for keeping the crowd calm and entertained during a minor setback involving a collapsed barrier.

With any punk band who base their sound upon fast, aggressive playing there is always a risk that after a few songs they do tend to start sounding very similar, however this was not the case for Rise Against with each of their hits still managing to sound unique and fresh, and new tracks which did not sound like regurgitated material that had failed to make the cut on a previous album. As for the stage show itself, it was hard to ignore the fact that a lot of time and money had been put into making their performance more of a spectacle than one would expect from a punk gig. The impressive lighting and backdrops gave their set an added dynamic, one which may be considered excessive by the hardcore punk loyal, but after 15 years on the go their show lacked none of the rawness that got them where they are today.