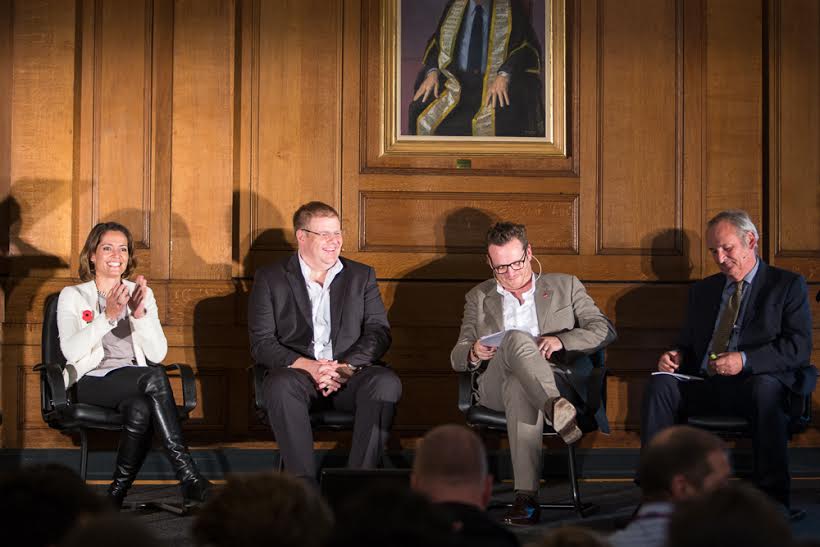 Eco Machines: Designing the cars of the future

“If General Motors had kept up with technology like the computer industry, we would all be driving $25 cars that get 1000 miles per gallon.”

It’s an iconic quote commonly attributed to Bill Gates, although it’s fairly unlikely that he actually said it.

Whoever did say it, though, was certainly raising a valid point. Cars have significantly improved since the Model T first rolled off the production line, but compared to many other industries and technologies, the advances haven’t been as impressive as you might expect.

True, the world is more mobile than it has ever been, but at what cost? The environmental and social impacts are colossal—emissions are through the roof and congestion is a recurring nightmare across many parts of the world.

Four experts from the automobile and racing industries presented their views on the future of the automobile industry in an event hosted by the intellectual debate forum Intelligence Squared.

Amanda Stretton, a racing driver and leading motorsports journalist, was the first to speak.

As she took to the podium, the host asked her to specifically address one particular question—what has motor racing got to do with future energy challenges?

Stretton began by stating that road cars need to become more specialised and that developments in the world of racing will lead the way. She emphasised that we can’t keep burning fossil fuels and that unless something changes, motoring costs could skyrocket.

Upon hearing all this, a sceptic might say, “so why is motor racing acceptable? All you’re doing is burning valuable fuels for no reason.”

The truth is, there’s so much more to motor racing than that, and Stretton proceeded to tell the audience exactly why racing is acceptable and why it could be instrumental in shaping the future of the automobile industry.

“Racing is all about efficiency,” she emphasised. “To win a race, you’ve got to be efficient.”

She then spoke about two different branches of motor racing—the famous 24 hour race in Le Mans and Formula One.

To succeed in Le Mans, endurance and efficiency are paramount. A fine balance must be struck between speed, aerodynamics and the longevity of the car’s components.

In F1, the cars must be quick and light. Care must be taken not to wear out the components.

One thing that both events have in common, Stretton stated, is that there is no compromise regarding the design of the cars in either of them. The cars are highly specialised and designed to outperform their competitors. “This competitive edge always results in innovative thinking,” she said.

Stretton went on to say that the world of motor racing is a hotbed for testing new technologies. Le Mans has seen both hydrogen fuel cell cars and electric vehicles trialled there over the past few years, whereas F1 is a groundbreaking environment for engines.

The purpose of this is not just to win the race. This testing is done with the aim of developing new technologies for normal road cars. After all, why else would the likes of Renault and Mercedes-Benz be investing in it?

Another key point that Stretton mentioned was the fact that we need to think more about what efficient motoring really is.

“An automobile needs to be a way of getting from A to B as quickly and efficiently as possible,” she said. It really is that simple. Road cars have to become specialised in the same way that race cars have.

While she believes the so-called “family” car will still thrive in rural areas, vehicles that operate solely in urban areas will change drastically. She hopes to see the use of driverless cars increase in cities.

Her final statement was that in the future, cars will be designed for a specific job. “Racing cars have always lived by that doctrine,” she concluded, “because inefficiency loses you the race.”

Norman Koch, the Global Technical Director of Shell Eco-marathon, was the next to present his ideas to the intrigued crowd. As he rose from his seat, he was asked by the host why Shell were so interested in fuel efficiency.

“Shell has been selling energy for over 100 years,” he answered. “And if we want to continue selling it for another 100 years, we have to do something about it.”

He went on to talk about the world’s rapidly growing population and the fact that every year, more people grow out of energy poverty.

The number of cars on the road is constantly increasing, as is the number of people wanting to drive them. It’s an enormous global challenge and, in the words of Koch, “the only answer is efficiency.”

He spoke about the Shell Eco-marathon, a global challenge in which student teams are tasked with building the most fuel-efficient vehicle possible. Whoever can travel the furthest on the least amount of energy wins.

Koch stated that whilst at first glance it might resemble Wacky Races, the reality is that the Eco-marathon is engineering in its purest form.

The event is all about creating ideas with a specific goal in mind. Teams apply engineering principles to absolute perfection, giving equal attention to all parts of the vehicle.

The winning team at last year’s Eco-marathon managed an astonishing 3300km on just a single litre of fuel. When I’m back home, I quietly celebrate if I manage to get over 60 miles per gallon in my beloved Volkswagen Up. The Eco-marathon winners could make over three trips across the United States on the same quantity of fuel.

When asked by a member of the audience how the winning designs were applied to everyday engine manufacture, Koch stated that a large proportion of the 5000 students who enter annually go on to join a related industry.

They bring the ideas and imagination that they displayed in the competition with them, which can only have a positive effect.

“Companies do not innovate,” he concluded. “People innovate.”

The third member of the panel was Jason Barlow, a well-known journalist and broadcaster in the motoring world. Having presented Top Gear prior to its relaunch in 2002, he now acts as editor-at-large for the BBC Top Gear magazine.

From the start it was apparent that he was an old-school car enthusiast with a deep passion for anything that revs. He wasn’t afraid to boast about his love for engines and his fascination with their operation. Incoming EU regulations will result in the downsizing of all new engines, but although Barlow was visibly disappointed by this, he emphasised that the future is very bright for the industry.

“This is an amazing time for innovation,” he explained. “We are on the cusp of an amazing new era.”

Barlow stated that this calendar year will go down as the tipping point for hybrid and electric cars and he believes that the move towards sustainable personal mobility is accelerating.

The Toyota Prius was the first mass-produced hybrid vehicle, although in Barlow’s eyes it was never really an option when it was first introduced worldwide in 2000.

Fast forward 14 years, however, and the story is completely different. “This year, there are loads of hybrids that I want,” he said.

There has been a crucial convergence of brand and technology, which has resulted in vastly improved vehicles that have the capability to enhance everyday life.

He mentioned the surprising fact that Porsche sell more hybrids than anyone else in the UK and described the electric BMW i Series as “hero cars.”

The next major focus will be the emission of nitrous oxides. “It gets no easier for the industry,” Barlow joked. He concluded by stating that this is a very good time to be entering the motoring world. “Meeting these challenges means there’s never been a more exciting time for automobiles.”

The final person to speak was, in the words of the host, “the one who we would rush home and tell all our friends about.” Richard Noble, the Scottish entrepreneur who held the land speed record for 14 years following his 634mph drive in Thrust2 in 1983.

He spoke about his latest project, BloodhoundSSC, a supersonic vehicle which his team hopes will be able to surpass the 1000mph barrier. It’s a car with the same power as an aircraft carrier.

As interesting as the project is, it almost contradicted the theme that had been established by the previous speakers. Noble acknowledged the huge problems that the world faces regarding fuel efficiency and admitted, “we don’t have the solution.”

However, just as Amanda Stretton was quick to point out the huge importance of racing technologies, Noble was also able to justify his latest endeavour.

Inspiration was the key word. It’s no secret that many branches of science and engineering are in desperate need of more young people and Noble is keen to attract more children and teenagers into these industries.

Noble expressed his desire to make BloodhoundSSC the world’s first global STEM programme in a bid to reach out to the next generation. He believes the problem lies in primary schools and stated that children need to be inspired from an early age.

He spoke about the so-called ‘Apollo Effect’ that occurred between 1961 and 1972. The Apollo missions enthralled the general public to such an extent that the increase in applications for Ph.D.s in physics was enormous. Noble hopes that BloodhoundSSC can have a similar effect.

He stated that school teachers shared his desire to inspire the younger generation, but were adamant that every single bit of data from the BloodhoundSSC project should be released. If you want to persuade them to follow in your footsteps, why hide anything from them?

Noble agreed. Whilst many other similar industries can’t release all their data, the BloodhoundSSC project will.

An interesting Q&A session then followed. The prospect of driverless cars was raised, which seemed to split the panel. Amanda Stretton was adamant that they have a place in the future of automobiles, whilst Richard Noble wasn’t convinced. “It’s a bloody nightmare!” he laughed, explaining that there was simply no way that both normal and driverless cars could share the roads together.

Public transport was also mentioned, as was the concept of choosing energies in the future, rather than choosing the design of a car.

This is a defining era for the automobile industry. Manufacturers have already started focusing on moving towards a world with greater fuel efficiency.

This is a huge global challenge, but after listening to these experts speak and seeing for myself what students are capable of, I’m confident that we will find a way.