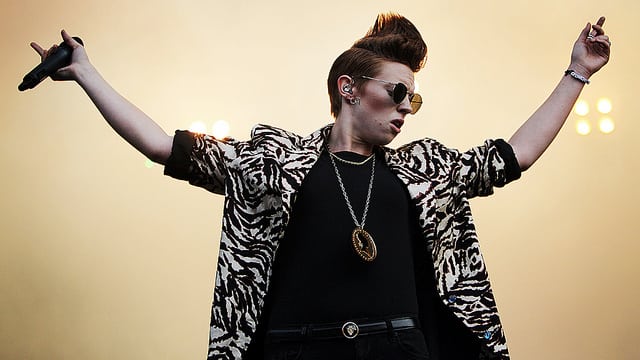 La Roux hasn’t come on all that much over the last few years. She’s still making catchy, melodic and entertaining electro-pop, she still appeals to pretty much everyone and she still has a majestic ginger quiff. As far as her live show goes, this is great news for all concerned.

After near enough five years off from shovelling her powerful hooks into the ears of both the mainstream and otherwise, the scene has changed somewhat, but she seems to be the perfect fit, with the dance and electro resurgence in full flow. The audience seemed to agree, with apoplectically excited twenty-somethings dominating the floor. La Roux, now officially just Elly Jackson after her split with writing partner Ben Langmaid halfway through producing this album, shared in this energy, showing no sign of nerves on her first tour as a completely solo outfit. She danced, she jumped, she ran and she revelled in the madness that was generated amongst her phenomenally enthused fans.

It wasn’t only the old hits which struck a chord though – the new ones generated a surprising amount of buzz amongst the majority of a crowd who almost certainly came for the prestigious name on the ticket, not for the recent musical output. Despite this, there was, like on record, no one track which could really match a pure floorfilling anthem like ‘Bulletproof’, and the chances of walking out of a gig on this tour saying “yeah, that new one was good, that one with the bass line” or “that one with the big chorus” are slim.

La Roux’s live show is energetic, enigmatic and still chock-full of those great tracks which everyone knows from 2009, however there is still something missing. She won’t be able to trade on past glories forever, but they’ll do for now, for a souped-up comeback tour.