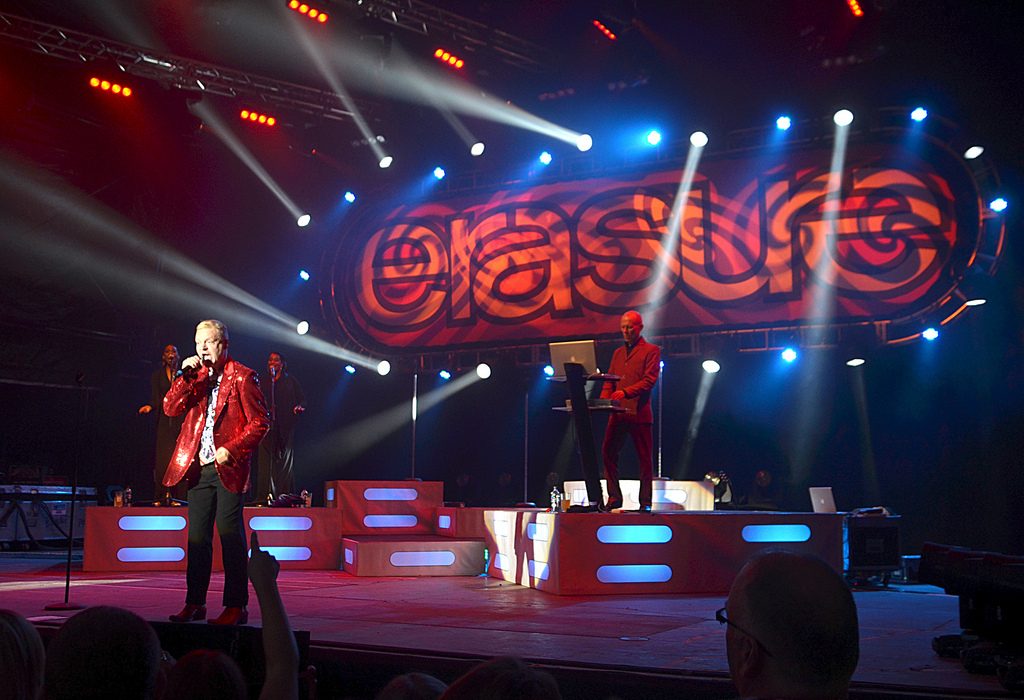 For the uninitiated, Erasure are a British New Wave duo formed in 1985 by frontman Andy Bell and synth player Vince Clarke, the latter of which’s long and winding list of projects also includes Depeche Mode and Yazoo. Since their late 80s heyday they’ve sold over 25 million albums and continue to retain a fiercely dedicated following. Their sixteenth album, The Violet Flame, was released earlier this year, and they’re currently supporting the record with a worldwide concert tour, including a sold out date in Manchester which proved to be camp, nostalgic fun for all.

Opening up with old favourites ‘Oh L’amour’ and ‘Star’, the band delivered a sleek, professional set that was unapologetically designed to please their rabid, deafeningly loud crowd. Bathed in blue and purple strobe light and flanked by two Grace Jones-esque backing singers, Bell snaked around onstage with the energy of someone half his age wearing a sequinned tailcoat and top hat that made him look like the long-lost third Pet Shop Boy. Clarke, meanwhile, chose to keep a low profile, coaxing out his trademark lush, layered soundscapes from behind the safety of his synthesizer.

More recent EDM-influenced singles like ‘Elevation’ sat seamlessly next to signature tunes such as ‘Victims of Love’, with the hard 4/4 club beat hardly letting up throughout the 90 minute performance. When the time came to bring out the biggest hits, ‘Blue Savannah’ and ‘A Little Respect’, the crowd were shouting the lyrics so loudly you could barely hear the band themselves; even the security guards could be seen mouthing along slyly, which is of course a testament to the irresistible pop songs the band have been creating for almost three decades. After closing the main set with ‘Chains of Love’, the band then returned for a short, punchy encore of ‘Always’ and ‘Sometimes’ before departing for good.

In a world where being ‘cool’ and ‘edgy’ is an overriding concern for many musicians, it’s refreshing to see a band who, though now deemed pioneers of electronic music, refuse to take themselves too seriously. Erasure’s live show prioritises kitschy fun and a party atmosphere, and leaving the venue it was hard to see it as anything other than a success. A big, garish, camp success.