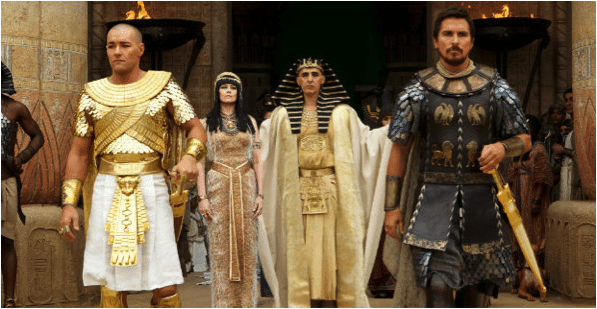 Everyone knows, at least vaguely, the story of the biblical Exodus, so I won’t bore you with an extensive plot summary. Exodus: Gods and Kings follows the story of Moses and the Hebrews until their crossing of the Red Sea, the only significant change (excluding the skin tone of the major characters) being that the film focuses more on the relationship between Moses (Christian Bale) and Ramses (Joel Edgerton), as here they have been brought up more or less as equals.

Predictably for a 21st century biblical epic, Exodus is doubtful of the existence of God, and at the film’s outset Moses is an agnostic verging on atheist. After climbing a forbidden mountain, he’s hit on the head with a rock, and awakes to a vision, during which he is told of his calling to rescue the Hebrews from their enslavement. At this point, Moses’ scepticism is transferred to Ridley Scott. It is suggested by Moses’ wife that his vision was a hallucination caused by amnesia, and Scott takes every opportunity to show us Moses having shouty conversations with apparently inanimate objects. Even the ten plagues, the hardest part of the biblical content to convey without asserting the existence of God, are linked together by some attempt at scientific explanation. This, to Scott’s credit, works pretty well; the causal connection between the plagues gives them a cinematic cohesiveness, and they are by far the film’s most effective moment, both visually and emotionally.

However, for most of its 154 minutes, Exodus is just far too silly to be impressive. Any additions designed to make the characters more 3-dimensional are amusingly ridiculous – Moses wears his mother’s umbilical cord as an item of jewellery to remind himself of his roots, and Ramses’ favourite pastime is topless wrestling with huge yellow snakes. Speaking of homo-erotic imagery, Exodus employs that age-old indication of moral hierarchy: the camper a character is, the more evil they are. Seeing as Christian Bale is decked out in enough fake tan and eyebrow pencil to satisfy the cast of TOWIE, it takes some doing for Ramses to top this scale – his bedroom is just a diamante-encrusted piano away from the set of Behind the Candelabra.

I won’t linger too long on the unintentionally funny script, but it contains some painfully bad lines, including the least sexy way to start an erotic encounter (‘You may proceed’). The acting, too, leaves something to be desired; Bale (who seems to think if he shouts a line loud enough no-one will notice how bad it is) brings nothing to what is, to be fair, a very limited role, while Aaron Paul is hilariously bad as Joshua (who shouldn’t be alive yet, if we’re being picky), and looks far more like a meth addict than he ever did in Breaking Bad. The most unusual piece of casting, however, is that of 11 year old schoolboy Isaac Andrews. Casting a child as God could theoretically have worked quite well, if he did in fact ‘exude innocence and purity’ in the way that Scott claims, and was generally a bit less unnecessarily aggressive – sure, Old Testament God was a bit of a bastard, but he was never quite this irritating.

Overall, although it has successful moments, Exodus just doesn’t work. The Bible doesn’t make the best source material, simply because it doesn’t contain the sort of enclosed narratives required for cinematic storytelling, contributing to the fact that the film takes far too long to get going and far too long to end, and feels completely unsatisfying. Unfortunately, in the hierarchy of Ridley Scott epics, Exodus lies far closer to Kingdom of Heaven than to Gladiator.