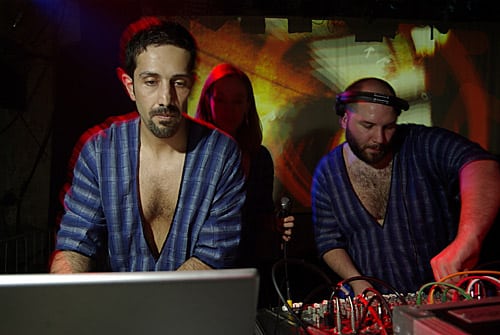 Another Selective Hearing, another ridiculous line-up; this night promised an eclectic feast of all things house music – served up by the likes of Berlin’s wunderwoman Tamo Sumo and Edinburgh based Prosumer. The responsibility for hosting such a stellar line-up inevitably fell in the hands of Sankeys, and whilst the club has received its fair share of criticism in the past, the recent changes to its basement layout has revitalised many peoples’ optimism about the venue.

First up was Virginia. She is perhaps most well known for her vocal collaboration with Steffi on ‘Yours’, but deserves to be equally known for her DJ’ing talent. In between dropping frenetic bangers such as ‘Flash’ by Fix she showcased her pitch perfect vocals in full force singing over many of the more stripped back tracks dropped throughout her set. Smooth transitions and an even smoother voice which carried impressively well through the soundsystem, warm up duties were well and truly fulfilled as she handed over to Tamo Sumo.

Personal anticipation couldn’t have been higher as Tamo Sumo stepped up. A widely regarded “DJ’s DJ”, Sumo quickly reinstated her reputation of fusing an eclectic range of house. Her reputation was fulfilled at some points, but at others it lacked. At her best, Sumo fused bass and explorative melodies expertly, holding the crowd with strong low end rhythms granting her the licence to delve into more leftfield selections. Unfortunately the set lacked momentum in places, perhaps influenced by the lack of engagement from the crowd. Experience of going to Sankeys has shown that the club draws in various crowds, many sadly attracted by the clubs status and not by the events it hosts. Unfortunately this seemed to be the case on this occasion as well, however it was no night-breaker.

4am came and up stepped Prosumer and Murat Tepeli. Having more awareness of Prosumer’s DJ style, I was interested to see how Tepeli would influence its overall development. Tepeli’s energy behind the decks was infectious, translating to the crowd well and matched with equal enthusiasm by Prosumer. Having never seen Prosumer live and now witnessing his dynamic approach to DJ’ing, it became clear to me why he was such a sought after DJ across the world. It was surprising to read in his recent interview with the Mancunion that he does not enjoy the elevated platform DJs experience in clubs like Sankeys. Whilst he may not hold much value regarding the interaction between DJ and the audience, for me his dynamic mixing style is what sets him apart from other DJs in the live environment.

In this instance I found this compensated for the (ever so slightly) disappointing set by the duo. Littered with bouncy bassline orientated tracks, the set certainly didn’t lack energy. Peaking at tracks like the pairs collaboration on ‘Forever’ and Tronco Traxx’s ‘Walk for Me’ the set was a sustained attempt at full throttle fist pumping. The approach had a draining affect, causing a fair few to leave for the exits. Whilst I would have preferred the set to have gone deeper it was still varied enough for it to be enjoyable right the way through to the lights coming on.

Question marks still remain over Sankeys as a suitable venue. The bouncers remain thuggish and a general vibe killer whilst the soundsystem doesn’t quite have the strength yet to fill the basement. Selective Hearing appears to be at its best when its complete control over these factors – their recent warehouse parties have been brilliant, and word is there are more awaiting for us this spring!

Overall, Saturday was without doubt a success. Selective Hearing continue to have an amazing knack of not only booking the best underground acts around, but booking them when they are at the top of their game. Not at one point have they sold out and it’s a credit to them that they’ve sustained this reputation over such a long period.