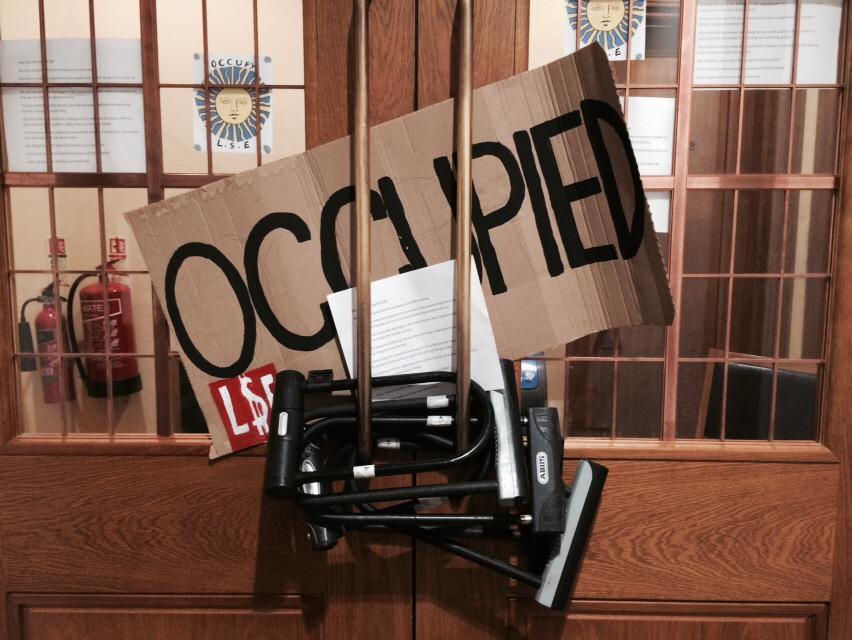 We base our struggle on principles of equality, direct democracy, solidarity, mutual care and support. Photo: Occupy LSE

A group of students at the London School of Economics have occupied a central administration room at the university in protest of the marketisation of education.

Around 40 students, as part of Occupy LSE, locked themselves with bicycle locks inside the Vera Anstey Suite, the central university administration meeting room, “to demand a change to the current university system.” For the duration, as yet indefinite, the room has been dubbed the Free University of London. The group released a list of demands early in the morning of Wednesday the 18th of March.

They are deeply critical of the “privatised, profit-driven, and bureaucratic ‘business model’ of higher education, which locks students into huge debts and turns the university into a degree-factory and students into consumers.”

Instead, they wish for higher education to be “liberating—which does not have a price tag. We want a university run by students, lecturers and workers.”

Their demands are split into five parts; the first is for non-profit education that is free and universally accessible—for tuition fees for domestic and international students to be scrapped.

Their second is for workers’ rights, which includes an end to zero-hours contracts and a close in the considerable wage gap between the highest and lowest-paid employees at the university.

They call for “genuine” university democracy—that is, a directly elected student-staff council to make university decisions. Furthermore they demand divestment from destructive companies, including the fossil fuel industry, and those who profit from the Israeli occupation of Palestine.

Their final demand is titled ‘Liberation’. They demand that the university takes a zero-tolerance stand to harassment and scraps the Counter-Terrorism Bill, which could threaten Muslim students and staff. They vocally call for the university to become a place free of “racism, sexism, ableism, homophobia, transphobia and religious discrimination.” Also, they directly demand that police are not to be allowed on campus.

They are running workshops throughout the day, including a talk on ‘Why Free Education?’, ideas about a change to the economics curriculum by Post-Crash Economics, and the screening of a film.

A spokesperson from LSE said: “On Tuesday evening a group of approximately 20 students occupied the Vera Anstey Room in the Old Building at LSE, highlighting a broad range of demands relating to higher education.

“LSE was founded for the betterment of society; it is encouraging that this principle continues to be a guide for many of our students.

“Exchanges between the group and LSE security staff have been positive.”

Guardian columnist Owen Jones also joined the activists on Wednesday at 5pm, and the movement has received a great deal of messages of support from students across the country.

Four years ago, students at LSE carried out an occupation calling financial ties with Saif al-Islam Gadaffi, the son of the late Libyan dictator, to be cut amid charges of crimes against humanity. They were ultimately successful in this campaign.