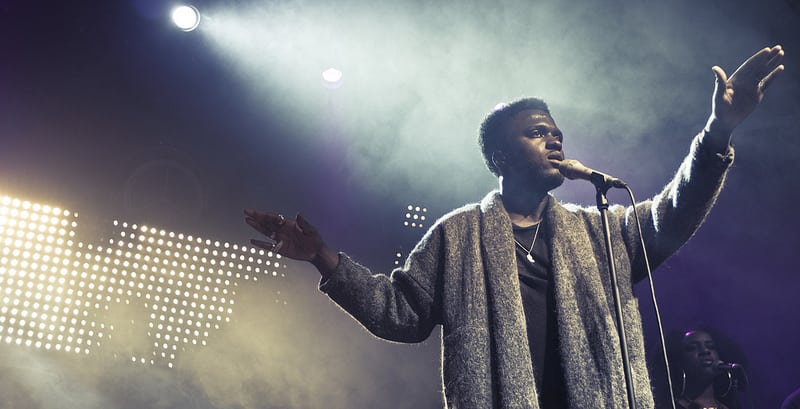 Donning an all black turtleneck and trench coat, Kwabs steps out under moody blue lights. Subtle, cool and mysterious; his music and his image go hand in hand.

The London based singer was longlisted on Radio 1’s ‘Sound of 2015’ earlier this year and it’s not hard to see why. What he offers is a mix of soul-drenched baritone over atmospheric synths that culminate in a sound that is as unique as it reads.

Kwabs’s vocals aren’t particularly powerful per se; yet they can’t be described as vulnerable either. His voice has a warm kind of texture to it, and songs such as ‘Last Stand’ and ‘Pray for Love’ are prime examples of his raspy tones; tones which are somewhat reminiscent of Luther Vandross (minus the poorly-fitted suits, mind you).

His music doesn’t hit you in the way you’d expect; as well as the dark and dingy atmospheric electro, other parts of his material border the funk or soul category. Midway through the set, he showcases a single he wrote with the most in-demand British songwriter of the moment Jimmy Napes; the song is a soulful groove which compliments his ranges perfectly. However, his performance feels a little underappreciated by a crowd expecting commercial ballads akin to the main act Sam Smith.

It almost feels as if something is missing in parts; his stage presence is aloof and he comes across quite distant from his band. ‘Wrong or Right’ is an electro-heavy R&B number with a hook that gets a fraction of the crowd swaying; however on the whole, it’s still rather too mysterious for the impatient fans.

He redeems himself partially by covering Arctic Monkey’s ‘Do I Wanna Know,’ however without the arrogant pompousness of Alex Turner to bring the song to life, it falls quite flat.
He ends the gig with his biggest hit to date – ‘Walk’ – which did moderately well in the UK (appearing on the FIFA 15 soundtrack), but was a massive success on the continent (reaching number 1 in Germany), and then quite literally walks off stage to dry applause.

Given his mixed performance, it’ll be interesting to see the direction of his upcoming album Love + War. You get the feeling that the performance was wasted on the wrong kind of crowd; perhaps the Germans are a lot more subtle, cool and mysterious than us Brits.