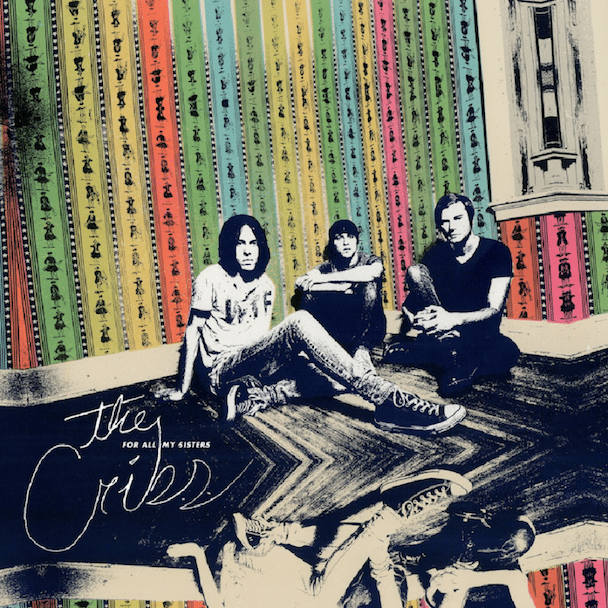 Album: The Cribs – For All My Sisters

“Punk rock and indie are dead.” That was the declaration from The Cribs when asked earlier this week about the relatively poppy sound of their latest album For All My Sisters. Though that comment was made in jest, it certainly touches on an issue in today’s music industry. Why would anyone be in an indie band in 2015? The big money of the 80s is no longer around, nor is the hipster credibility of the 90s.

Nowadays indie rock seems to spend more time looking backwards than forwards, looking to a time when the quickest route to success was to find the nearest six string and learn every major chord you could. With that in mind, what is there for a band like The Cribs to aspire to with each new album? On For All My Sisters the band finds a kind of solution to that problem by ignoring any posturing or pretension for 12 songs of ruthlessly tight pop songwriting.

That said, this being The Cribs, this is pop song writing via distorted guitars and wailing vocals. The band have never been one to overhaul their sound and fans will rest easy knowing this is still The Cribs as they knew them before, but with a keen focus reminiscent of Men’s Needs, Women’s Needs, Whatever. Teaser track ‘An Ivory Hand’ set out the album’s intentions late last year, sounding like the best Weezer song in nearly 20 years and showing the influence of producer Ric Ocasek from The Cars. His presence shows itself clearly later on through the jerky guitar riff of ‘Summer Of Chances’, which forges a stadium-ready chorus out of the Jarman brothers’ philosophical musings.

It’s an impressive feat that over its 12 tracks For All My Sisters never feels like it’s repeating itself, despite the lack of variation in musical styles on offer; only on ‘Simple Story’ and the 7-minute album closer ‘Pink Snow’ is there any change of pace. The only explanation for that can be the ridiculously high quality of songwriting on offer here. First single ‘Burning For No One’ successfully emulates the band’s 80s indie influences, walking a fine line between messy energy and pop efficiency, while ‘Different Angle’ would have been a highlight on any of their previous albums.

It may not be innovative stuff but no one ever came to The Cribs looking to hear challenging, ground-breaking music; they came for hooks and the band duly deliver. For All My Sisters is the closest yet to the classic album the band seem to have in them, and a welcome return for one of the most consistent and underrated UK bands around today.

Tags: Album, for all my sisters, review, The Cribs