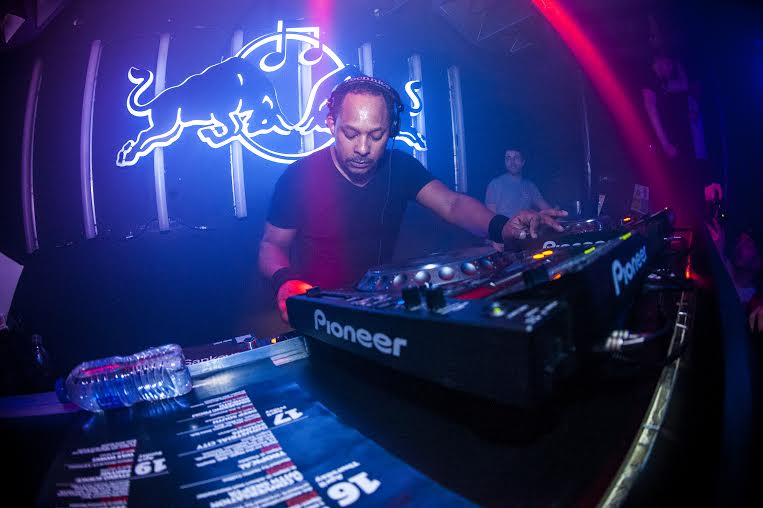 Having never been to Sankeys before and being warned by friends that I might not like it, I didn’t know what awaited me there. Perhaps booming bass drums, night owls staring with dilated pupils at the DJ’s podium – just a bog-standard techno night? But it was Derrick MayDay on the table, so it shouldn’t be, not when he’s been DJing for more years than I’ve been alive and involved in techno since its bloody birth.

So there he was: this 50+ year old master taking over the record player, pulling out a vinyl (keep it real!), not playing any oldies, not wearing a beige cardigan and suddenly bouncing madly with his head as he touched the mixer. High energy levels rose and were pulsating from the mixer over to Derrick over to the crowd; I spied one old raver dressed up in baggies shuffling as he reminisced about old Madchester.

Derrick May is truly a master of his craft, beatmatching songs within seconds and neither caring to use his headphones too long nor being helped by any visual aids as the generic spasming laptop DJ would do to create the impression he was busy. But May certainly was busy, using the knobs creatively, muting whole bars of songs to create a tearing discomfort, then relieving us with some banging Detroit four-to-the-floor.

He is not your ordinary 50 year old, at least he tried hard not to be – maybe a little too hard. His set was composed of contemporary underground techno, with industrial pounding, dark minimal synths creating an image of an abandoned dystopian city – Detroit, maybe? He didn’t play any classics, leading to some disgruntlement amongst the old school techno heads in attendance. Only small bits of soul diva vocals, lush deep synths and jazzy riffs reminded us of his musical heritage and created some warmth and emotion, which made the audience cheer and want to shake his hands.

The rest of the night was about going mad to tribal rhythms chosen by this futuristic shaman, and everyone tried to participate in this ritual. But I wouldn’t say his set created any ecstasy or euphoria within the crowd. Maybe his trademark sound wasn’t bog-standard enough. As he ended his set, however, he left a deep impression on me when he sat down next to the table unmoved, facing the wall, meditating, seemingly redeemed by nothing else but the hi-tech rhythms.