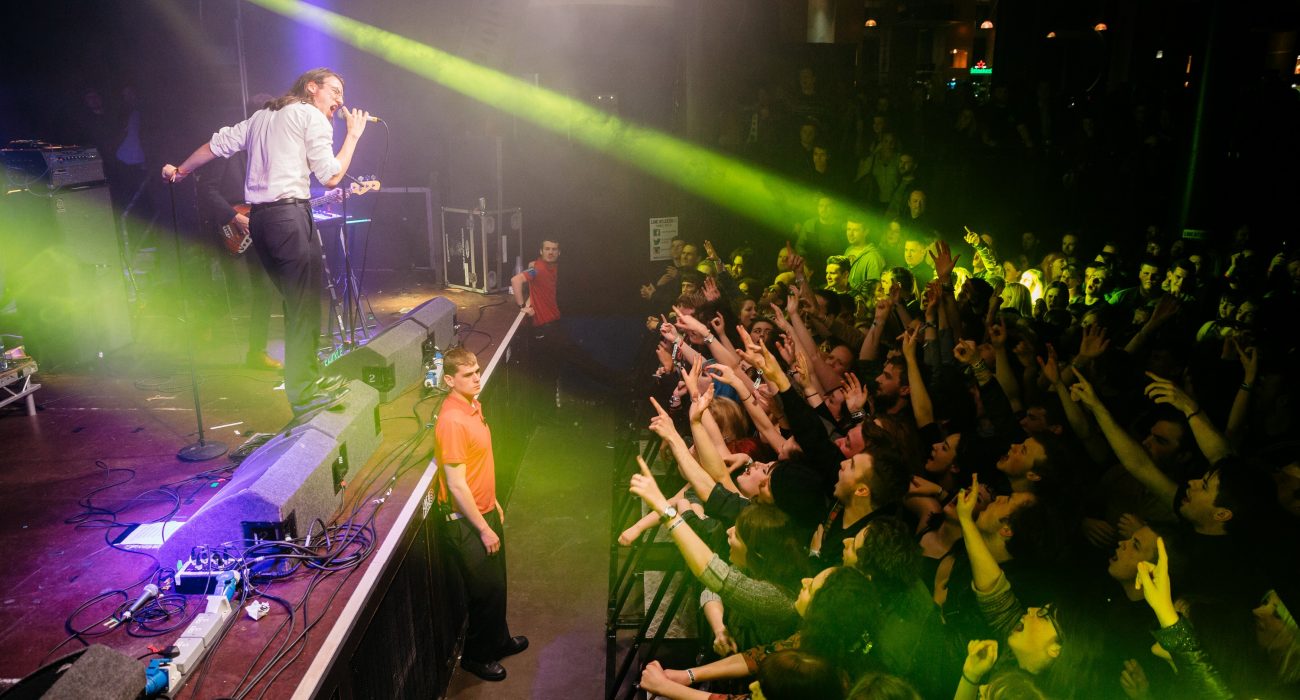 Live At Leeds festival took place over the May bank holiday, and once again proved to be a fantastic day packed full of upcoming music. At this year’s iteration, over 200 bands played at over 20 venues, so the real struggle once again was trying to choose what to see. The festival has a knack for booking the ‘next big thing’, and lots of really exciting upcoming bands played at this year’s festival, many of which were fresh from making a splash across the pond at America’s SxSW festival.

The day began with a set by The Orielles over at the Leeds Becket university stage. Despite some excellent tracks on their soundcloud, The Orielles proved to be disappointingly average. Poor sound balance meant that their vocals were nearly completely drowned out while the guitars were all over the place. The lightness and energy of the music was nearly completely lost, resulting in a heavy mess. Early release ‘Space Doubt’ sounded good though, proving that with a bit of time and polishing this band will be worth paying attention to. Don’t lose hope in The Orielles just yet.
4/10

After a lunch eaten on the move, we were lucky enough to stumble across The Vyrll Society play a set at the Leeds Uni stylus. The reverb heavy basslines driving their songs paid homage to the Stone Roses, and the layer of luscious psychedelic guitar over the top was reminiscent of Kurt Vile or The War On Drugs. Extended solos and jams on songs like ‘Beautiful Faces’ were extremely impressive for such a new band. It’s a shame that their name is so hard to pronounce, but the band are playing a set at Mancester’s Soup Kitchen in the coming weeks if you want to check them out.
7/10

Following The Vyrll Society, we popped next door to Leeds Uni Mine to catch a set by Liverpool based GULF. Unfortunately GULF proved to be pretty boring. The band seemed to have the right components, but lacked that ‘wow factor’. Perhaps they could benefit from stripping some of their songs back a bit more and emphasising some of the guitar or keyboard lines. Good vocals though.
3/10

The Big Moon, the female answer to Palma Violets (who were actually one of the festival headliners this year) played next back at the Leeds Becket stage. The band has been receiving some press attention recently, and recently played a brilliant set at Fallowfield’s own Fallow Café. Upcoming debut single ‘Sucker’ sounded brilliant, as did the frenzied ‘Eureka Moment’. Annoyingly the gig also was plagued by sound difficulties (maybe it was something to do with the stage), but the girls managed to demonstrate potential and pulled off a good show.
6/10

Hot off the press from SxSW, Gengahr were up next, and the band proved they are really deserving of the hype. Not just a cool name (a misspelling of the Pokémon Gengar), they have a really interesting sound, which translated really well into the live setting. ‘She’s a Witch’ with its funky guitars and falsetto vocals was the clear highlight of the set. Keep an eye out for their debut album out in June, and make an effort to catch them before they hit the big time.
8/10

The day was getting on bit by the time were treading the familiar steps back to the Uni Mine to see Spector. The band has been oddly quiet for the last couple of years, but I was looking forward to catching one of their notoriously energetic sets. Thankfully the last couple of years haven’t dampened Spector’s energy a bit, and frontman Fred MacPherson was as witty and amusing as ever. Their set largely consisted of songs from their upcoming second album Stay High, with its thundering guitars diminuendos and sing-along chorus, along with recent single ‘All The Sad Young Men’ really stood out. Spector’s old material was still as catchy and energetic as ever, but angsty songs such as ‘Twenty Nothing’ couldn’t help but sound a bit tired compared to the brilliant new material that they played. The new songs demonstrate a much more mature writing approach if the ones played are anything to go by, and I’m definitely anticipating their follow up album to debut album Enjoy It While It Lasts.
8/10

Picking which of the 15 festival headliners to see was particularly hard. The Cribs and Palma Violets were playing at the Town Hall, but this reviewer decided to dodge the mammoth queues for those and opted to see Leeds’s very own Eagulls (who were coincidentally again playing at Leeds Becket). The energy of Eagulls’s set was certainly striking. The band hurtled raucously through opener ‘Tough Luck’, and straight into ‘Nerve Endings’ without a seconds pause. Their post-punk sound certainly won’t be everyone’s cup of tea, but the energy and driving guitar riffs behind their music have a certain charm. ‘Hollow Visions’ was the highlight of the set, but it’s a shame that quite a few of their songs do sound nearly exactly the same as each other. It would have been nice to hear a bit more diversity in their set, such as the guitar breakdown on ‘Moulting’.
7/10

Live at Leeds again proved to be a brilliant day out, and is definitely worth attending next year if upcoming music is your thing. While the festival’s headliners seem to be getting more and more impressive every year, this festival still remains an excellent place to catch upcoming bands. Just make sure you make the most of the day and are prepared to do a lot of walking!