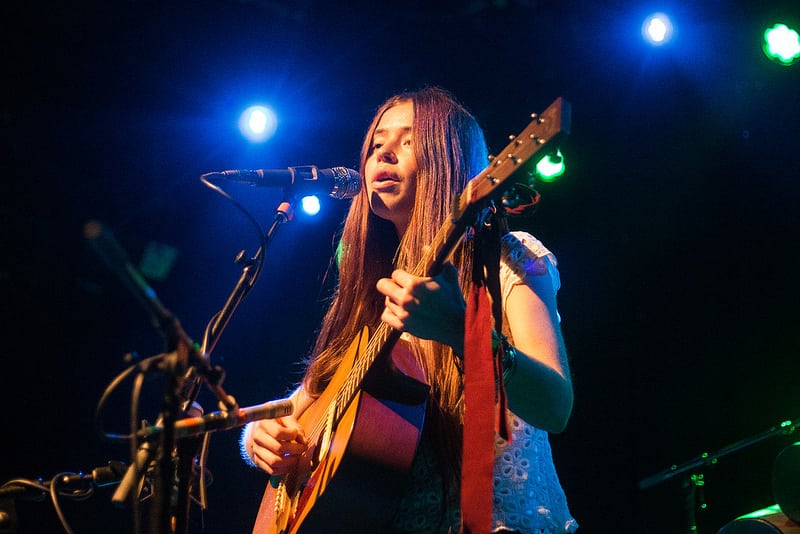 Those at tonight’s sell out show at Night & Day were treated to two captivating sets from a pair of upcoming stars; Tobias Jesso Jr., supported by Flo Morrissey.

Despite having only released two songs so far, 20 year old Flo Morrissey played a surprisingly substantial set. The singer’s enchanting sound combines vocal elements of Kate Bush with Lana Del Ray’s melancholy. Unreleased opener ‘Betrayed’ along with recent single ‘Show Me’ were particular highlights of the set. It’s a shame that the stripped back acoustic version of ‘Pages of Gold’, her most well known song, does not have the same conviction as on record, perhaps suffering from the lack of a backing arrangement.

Taking over, Tobias Jesso Jr. played a similarly engrossing set, with his well-written songs and goofy stage persona charming the Manchester crowd. In a similar vein to his support, Tobias played a grand piano (save for two songs with a guitar) with no backing band present. His rather short set included the entirety of debut album Goon, but it was actually non-album track ‘True Love’ that was the highlight of the evening.

His stage demeanour and willingness to joke with the crowd in between songs is at time like a toned down fellow Canadian Mac DeMarco, which is no bad thing. The show is brought to a close with a sing along to the heartfelt ‘How Could You Babe’, which instigates the biggest sing along of the night, and temporarily transports the crowd away from the thundering Manchester rain outside.

It was refreshing to see two solo singer songwriters captivate the audience like they did. As both artists are going to start touring with backing bands in future, this was a special opportunity to see them perform solo at the beginning of what will be no doubt successful careers.