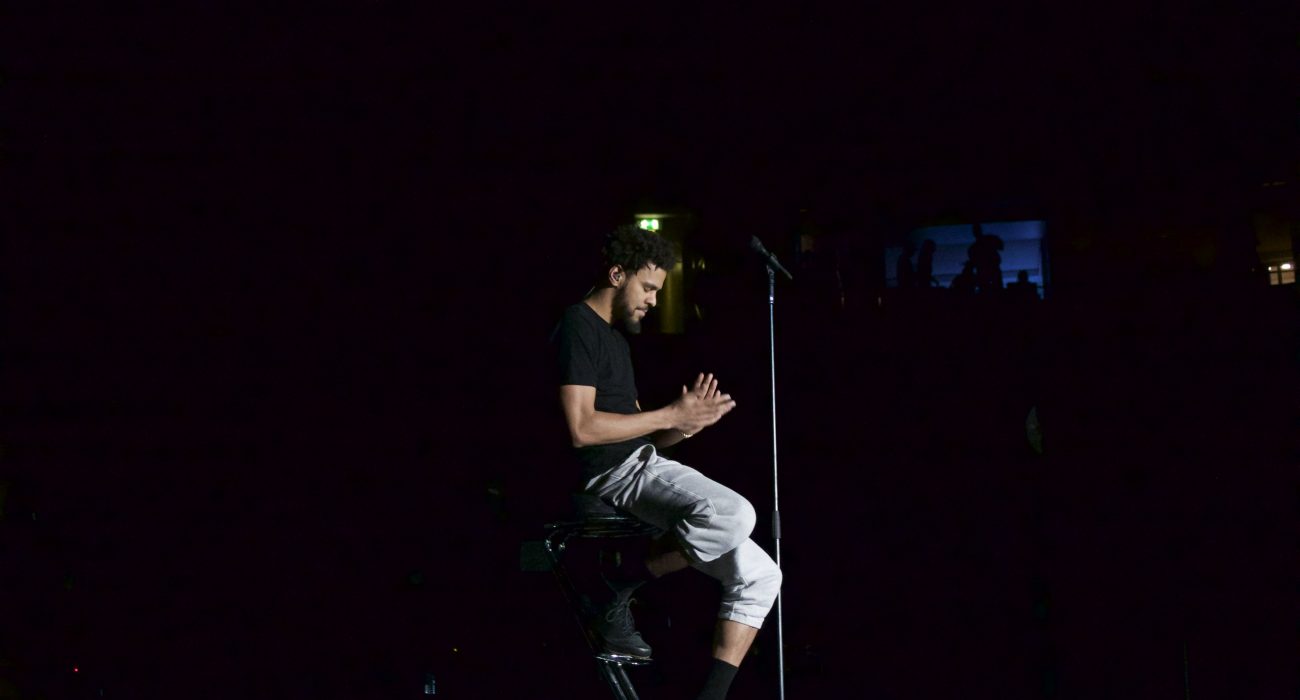 Some eight or so years ago, a kid with a dollar and a dream hailing from a small town called Fayetteville, North Carolina set up Dreamville Records, and on it released his first mixtape The Come Up. Today he stands as the label head and mentor to signees Cozz, Bas & Omen, as well as being friends with rapper Pusha T and singer Jhene Aiko. On his biggest tour to date, J. Cole brings them all along for a journey that takes it back to his childhood home in Fayetteville: 2014 Forest Hills Drive.

Cozz and Bas are the only names among the Dreamville collective who are of note. Cozz’s ‘Knock The Hustle Remix’, and Bas’s ‘Lit’ and ‘Just Made Bail’ (which all feature Cole) as expected go down very well with the crowd.

The ever-excitable Pusha T is next up, opening with ‘King Push’, grunting and grimacing his way through a half hour set that includes Kanye collaborations ‘Runaway’, ‘So Appalled’, ‘Mercy’, and ‘Don’t Like’, which all receive the biggest receptions. The bass heavy sound at the Arena suits his angst-filled sound down to a tee. It’s interesting to note that he doesn’t rap over instrumentals, rather he performs over original tracks which give the songs a weird echo during his set. He appears strangely out of breath and seems as though he’s losing his voice on most of his songs. For a guy that raps about dealing cocaine and headbutting his side bitches his demeanour feels a little fatigued. He rounds off his set on a high nonetheless with fan favourites ‘Nosetalgia’ and ‘Numbers On the Board’ (complete with angry headbutt).

In complete contrast, Jhene Aiko’s performance is more dream catchers, floral harems and finding your spirituality than headbutts and cocaine. Her delicate vocals aren’t suited to bass-heavy Arena level sound, and for an artist who is nothing short of angelic through headphones, her vocals are pretty weak in person. ‘Bed Peace’, ‘The Worst’ and a groovy six-string rendition of Drake feature ‘From Time’ all give the crowd something to sing along to, mind you.

9:25pm sees the curtains rise revealing a full band, including Cole’s long-time selector DJ Dummy on the decks. Out steps J. Cole to his adoring fans, as he asks “Do you wanna, do you wanna be happy?” the first words of the album and the intro to ‘January 28th’. His rough hair and unkempt beard are a reflection of the exhaustion and frustration he feels about the “Hollywood lifestyle,” which he makes us very aware of during his monologue interludes throughout the gig.

The announcement that he will perform his entire album from front to back is met my by welcoming cries, however it means he’ll miss out earlier material such as ‘Who Dat’, ‘Let Nas Down’ and ‘Before I’m Gone’. It’s not all doom and gloom however, as he incorporates ‘Lights Please’, ‘Can’t Get Enough’ and ‘Crooked Smile’ to please his pre-2015 fans.

Cole has reached a point now where his back catalogue is so big that he can’t play everyone’s favourite song anymore. Although the stage is bigger and the lights are brighter, the integrity, honesty and energy are exactly the same. It is pertinent that Cole has an obvious message in view of the success he’s garnered, and one which is a clear middle finger to the money, fame and phony people he’s come into contact with over the past few years.

He expands on the subject in the run up to ‘No Role Modelz’ stating that the song is about a girl who chases a life of fame and believes in her fictitious happiness; in reality she is aloof, lost and unable to help herself. In a similar vein, ‘St Tropez’ is a highlight, admitting whilst he couldn’t point it out on a map, the high life in the south of France isn’t all it’s cracked up to be.
His honesty is admirable and his sensitivity is emotional; his charm and charisma overall make him a superb performer. Given the noticeable amount of empty seats, you can’t help but feel his intimate act would feel more at home in a smaller venue.