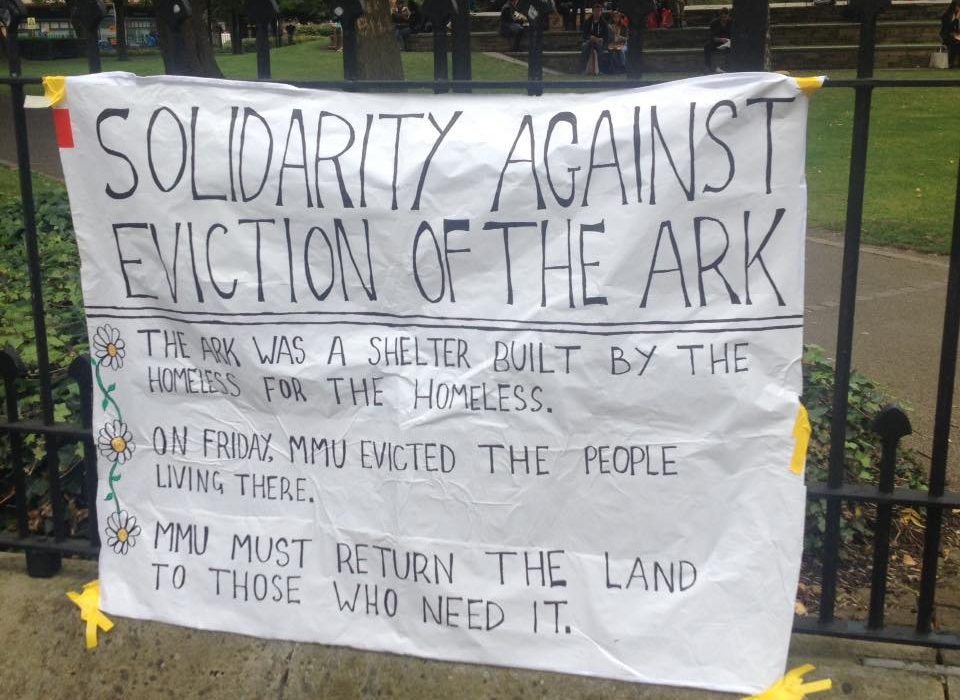 In the midst of Manchester’s homeless crisis, ‘the Ark’ was created this August as a “self-serving community” to provide some measure of protection for up to 20 rough sleepers under the Mancunian Way. However, MMU claims rights to the land and was granted court permission to disassemble the site last Friday.

Throughout Friday morning, violent altercations between protestors and MMU enforcement officers broke out, as bailiffs tore down tents and barriers. One homeless activist, Jen Wu, was hospitalised after she appeared to be dropped by four male enforcement officers. Videos from the scene drew scathing criticism from many university officials and students.

In open letter to the Vice-Chancellor of MMU, published on the 18th of September, 60 senior lecturers and members of staff called for the university to “demonstrate its commitment to social justice by putting our learning and research to good use in the demand for proper housing and services for this vulnerable group of people.

“The University should be seeking educational futures for these people, not condemning them.

“This is a key moment for MMU—an opportunity to join the wave of humanitarian support we have witnessed for homeless refugees, and extend a hand of friendship to these homeless people on our doorsteps. As academics, staff and students we have a wealth of expertise and resources. It is time to put these to good use in combating homelessness and its effects. We urge you to drop the lawsuit against these victims of cutbacks in welfare and services, and consider the damage that may be done to the University by any attitude or action which smacks of ‘social cleansing’.”

At Wednesday’s protest, about a hundred student protestors chanted to bewildered first years, “Say it loud, say it clear, the homeless are welcome here!” and “Lives not land!”

Homeless members of The Ark have been told not to protest without a license in the vicinity of the Mancunian Way, however many rough sleepers made an appearance clearly glad of the solidarity displayed by the students.

One member of the Ark, Dominic, told this reporter: “This is amazing, it’s so good to see these students getting involved, and it’s absolutely brilliant!”

Rosa Methol, the organiser, told The Mancunion that, “after witnessing Friday’s heartbreaking eviction of the Ark homeless shelter and speaking with lots of people on that day, we realised how much sadness and outrage there was amongst MMU students and staff as well as the general public about the decision MMU made. We decided to put this feeling into action with the protest today and feel it was a very positive step to raise awareness, especially with new students whose Fresher’s fair took place today.”

This Thursday, the Executive Committee of the University of Manchester  Students’ Union issued a statement, saying that they are “appalled [by the] treatment of those at The Ark homeless shelter.

“This is a shocking reflection of the society that we live in; whereby instead of providing support and resources to the vulnerable, Manchester Metropolitan University and the Council worked to use excessive force to remove the homeless from the area, in what can only be described as an act of social cleansing.

“Instead of using their positions of power and privilege to improve the conditions of poverty and deprivation, they are choosing to sweep this issue under the carpet, hiding some of the visible effects of their continued £59million worth of public spending cuts.”