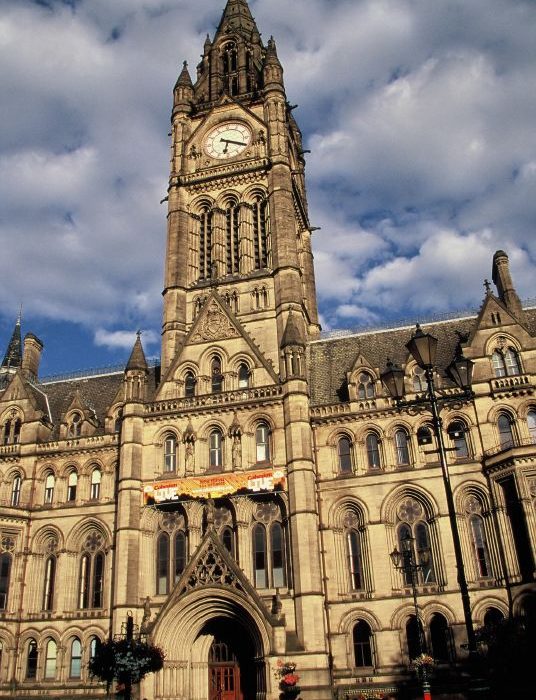 Thousands of people gathered in front of Manchester Town Hall on Friday 23rd October in order to celebrate or protest against the visit of Chinese President Xi Jinping. During his four-day visit in England, a series of investment deals have been signed. David Cameron welcomed him in Manchester to visit the National Graphene Institute and to promote the government’s Northern Powerhouse agenda.

Amidst the cheering of Chinese supporters, protests were called by many organisations. The reasons for protesting were varied but the main concern was China’s human rights record. The Manchester Disabled People Against The Cuts (MDPAC) states that human rights abusers are not welcome in Manchester and that earlier protests in the city were apparently not clear enough.

Members of the Manchester People’s Assembly also voiced their concerns over many government deals and protested loudly with drums and slogans. People from all walks of life were present and came from all corners of the world.

A couple who flew to Manchester from the Netherlands protested with a big group against the persecution of people who practise Falun Gong. Under China’s last president, Hu Jintao, followers of the harmless health practice were persecuted and their organs sold for transplant. The European Parliament expressed their concern over this violation of human rights in a resolution in 2013.

Mary Begley, a guest lecturer and Ph.D. student at the University of Manchester, protested against the development of two new nuclear power stations at Sizewell and Bradwell. Investments in the Hinkley Point nuclear plant have been secured although it came under fire over its costs.

It will be more expensive than current solar energy sources and the Government has just proposed huge cuts to the Feed-in Tariff (FiT), the scheme that supports small scale renewables. Cutting the tariff will put at least 20,000 people at risk of job losses and harm further investments in renewable energy in the future. Gerald Kaufman, MP for Gorton, voiced his concern in a letter to The Mancunion but sees no point in attempting to sway Cameron’s opinion. However, he promised to remain active on the matter.

It wasn’t just the protesters who came from far away. The Mancunion spoke to supporters of the President, specifically Chinese students from the University of York, Liverpool John Moores University, and some who flew in from China. Many wore traditional gowns and uniforms to greet their President. Allegations from protesters that some students were paid by the government to cheer, wear stickers, and wave flags have been denied.

Another protester was given the honour of representing Tibetan refugees in Manchester by Chodak Hunter, a well-known Tibetan activist in the UK. Supporters of Tibet hoped that the President would be reminded of his human rights responsibilities and would learn from the power of debate and democracy on show during his visit.

Although the protesters’ voices were loud, the number of Chinese supporters was higher and they will probably have made a bigger impression on the President and the gathered crowds.