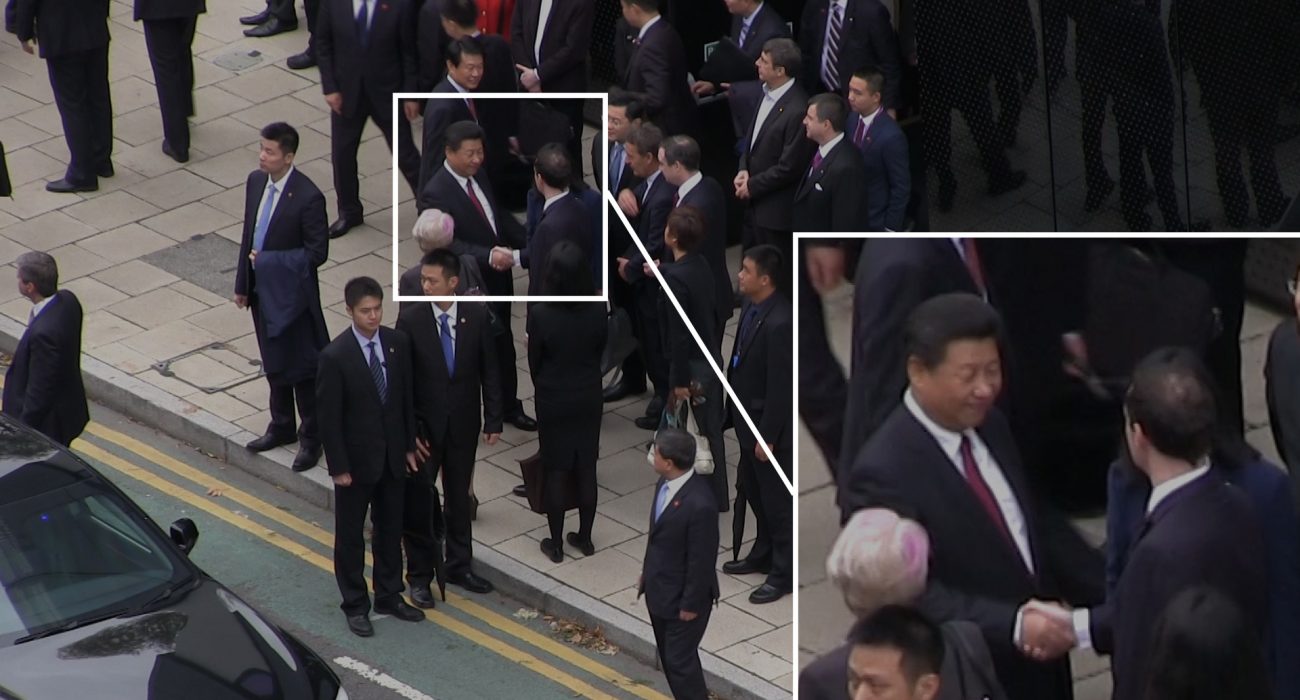 Xi Jinping talks with Rothwell and Osborne at the Graphene Centre. Photo: The Mancunion

Early on Friday morning, a huge crowd of Manchester students gathered and lined the streets to greet Xi Jinping, the President of the People’s Republic of China, on his last day of his UK tour. Mr Xi’s long-awaited visit to Britain comes after the last official visit by a Chinese Head of State ten years ago. This day also marks the first time that Manchester has been visited by a Chinese President. Among those to greet him outside the National Graphene Institute was the University’s President and Vice-Chancellor, Dame Professor Nancy Rothwell, and the Chancellor of the Exchequer, George Osborne.

The crowd were kept behind metal barriers and were adorned with face paint, waving both the Chinese Five-star Red Flag and Union Jacks. There was a harmonious atmosphere between students and police, because there was a shared excitement for the President’s arrival, with some students even managing to take selfies with the police.

As it got closer to 10:00am, the crowd grew more enthusiastic and cheers filled the street as the overhead helicopter signalled Mr Xi’s imminent arrival. Several police vans and motorcycles blocked both sides of Booth Street East, where the Graphene Institute is situated. A convoy of blacked-out cars followed and led the President to the red-carpeted entrance of the Graphene Institute. Students were left with bated breath as they tried to catch a glimpse of Mr Xi.

The President, a chemical engineer himself, was shown around the research centre by University of Manchester student representatives and observed demonstrations that presented a range of graphene-based prototypes, including pioneering drug delivery for cancer treatment.

The President’s visit coincided with the release of a statement from Huawei, the world’s largest telecommunications equipment manufacturer based in China. The company announced their partnership with the National Graphene Institute to research graphene and other related 2D materials.

Mr Xi swiftly left out of an alternative exit of the building, leaving hundreds of students and spectators disappointed as they had hoped to see the President in person. The President then met with the Prime Minister, David Cameron, outside The Etihad Stadium and the two leaders made their way to have lunch at the Town Hall.