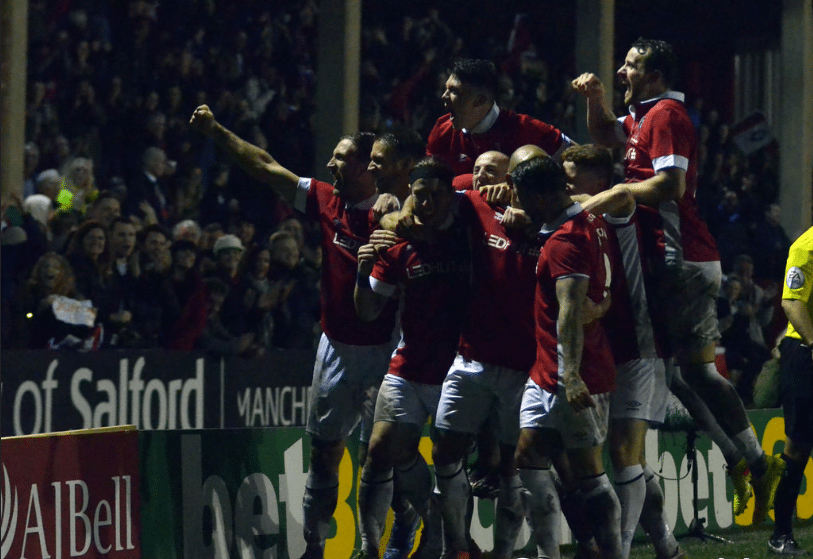 Over the course of the academic year, as well as paying close attention to, and prioritising the progress and successes of, our university’s very own societies, teams and campus sports, let our new Sport in the City feature tempt you into a very different sporting day out. Whether it’s a new sport, a team about whom you did not know, or just an event that interests us, we hope that we will be able to entice you to explore the wide sporting variety that the city has to offer during your time studying at the University of Manchester.

In the spotlight this week: Salford City FC

If you haven’t read about this week’s featured team in the paper, or turned on the TV without hearing either ‘Salford City’ or the ‘Class of 92’ mentioned in previous weeks, then where have you been? The semi-professional outfit based in the Kersal Area of Salford, Greater Manchester, are undoubtedly the name on everybody’s lips at the moment, kicking up a storm in the world of non-league football and coasting towards a consecutive league title based on current standings. So should we believe the hype? Although it takes much more than money for success both on and off the pitch (OK, so it helps), Salford City are blessed in having both the financial backing and also the valuable experience of five Premier League legends with a combined total of just under 2,400 appearances between them.

A stone’s throw away from their former stomping ground, Nicky Butt, Paul Scholes, Ryan Giggs and Gary and Phil Neville are the famous five who each own a mighty 10 per cent of the non-league side. The remaining 50 per cent of the club is owned by Singaporean businessman and investor Peter Lim. Lim is also the owner of Spanish giants Valencia, after securing a 70.4 per cent stake in the La Liga side back in May 2014, to claim full ownership.

In the previous editions of Sport in the City, I have always attempted to ensure that the sport in the spotlight for that respective week is both interesting but more importantly accessible for students to reach via public transport. Sadly however, opting not to focus on Salford City was just not an option given their recent escalation into the limelight in recent weeks and months, and I strongly believe that any extra time spent travelling will be worth it in the long-run!

Unfortunately, Salford City is not directly accessible via public transport. However, in terms of distance, Moor Lane, the home of Salford City, really is not too far away. Moor Lane is only 4.3 miles from the City Centre and by taxi, or perhaps if you’re lucky enough to have a car with you in Manchester, this would definitely be the best and only real way of getting there directly. Therefore, discussions of a move to a different stadium in Salford in the near future, in order to accommodate more fans, may also solve the problem of easy travel to and from the stadium.

Although transport may be hard to come by, and you may end up spending more on sharing a taxi with your friends to ensure a safe journey to and from Moor Lane, please take comfort from the fact that entry to the ground is more than affordable for students. Whilst a full-price adult ticket would set you back a mere £7 without a student card, those with student ID will benefit from the reduced concessionary entrance price of £2! A concessionary season ticket is priced at £40 for the whole season according to Salford City’s official website, which over the course of a 23 game season would mean each game would only cost you £1.75—oh the joys of non-league football!

With average league attendances of anything between 400 – 500 people, this could perhaps be your best opportunity to experience the rawness of non-league football before the Salford club catapult into stardom. The stadium itself can hold up to 1,500 spectators and attracted a sell-out crowd for both of their recent FA Cup ties against Southport and Notts County. With regards to watching the game from inside the stadium, Moor Lane is largely standing, although seating is available for those who prefer to sit and watch the game with some minor comfort. And of course there are facilities for refreshments as well as a social club situated inside the stadium.

Given the wealth of publicity the Salford outfit have received in recent times, those with an eye on the Class of 92’s project will of course know the background, the owners and a lot about their previous league campaign! However, their self-titled documentary was filmed during the 2014/15 season, meaning there have been some changes to the side. They’re aiming to earn promotion every season in their quest to be part of the football league.

Firstly, Salford City can boast a number of players with top-flight experience within their ranks, unlike the majority, if not all of their competitors in the Evo Stik Premier Division. With the likes of Danny Webber, a former professional with over 50 goals from almost 300 professional appearances for the likes of Manchester United, Leeds and Sheffield United, as well as Stephen O’Halloran, a former Aston Villa youngster with Football League experience with Southampton and Swansea City, they are a force to be reckoned with.

Off the pitch meanwhile, owner Peter Lim was tied for #949 amongst the world’s billionaires, with an estimated net worth of $2 billion. The non-league side have also recently signed a lucrative five-year shirt sponsorship deal with Umbro, and with just over 45,000 Twitter followers, they are more popular than professional non-league teams such as Barnsley, Peterborough United and the MK Dons.

Salford City, off the back of a recently televised FA Cup first-round win over Notts County, face AFC Stamford at home this Saturday, 21st November, at 3pm. For the latest information, please consult their website: pitchero.com/clubs/salfordcityfc