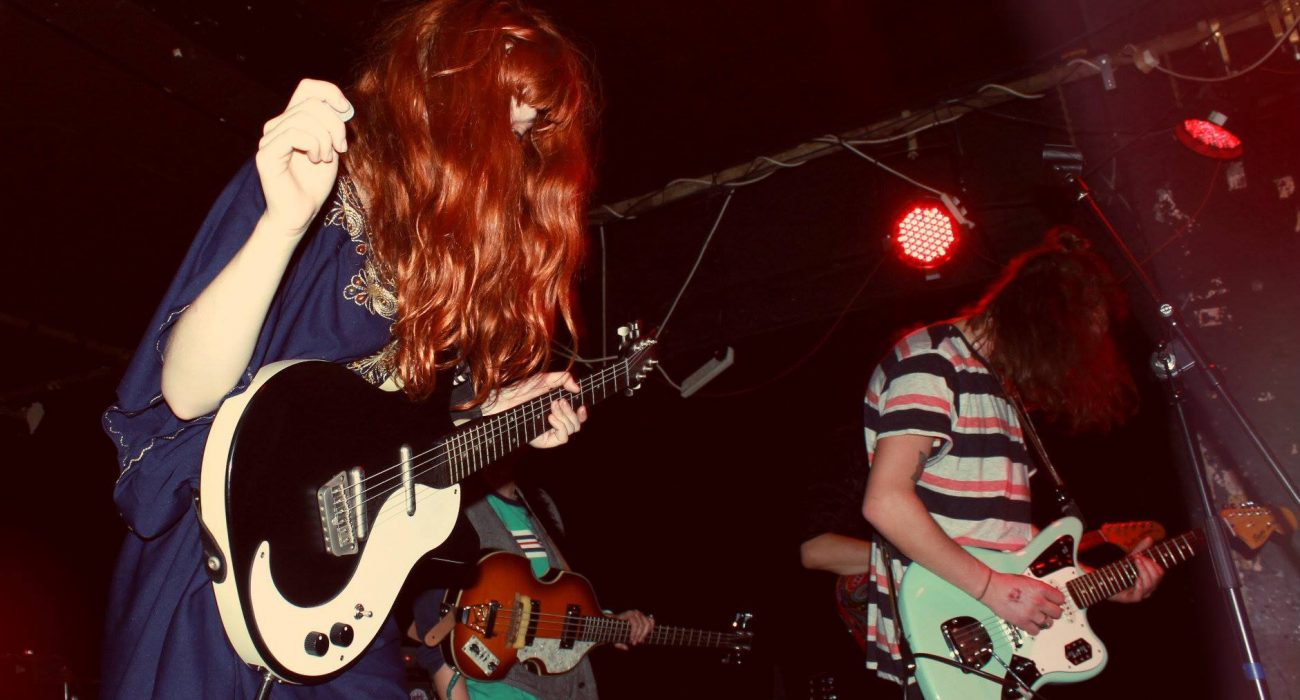 If you go to gigs in Manchester and you haven’t heard of Freakout Honey, you probably will have done by this time next year. They’ve not been around for long, but have a string of shows at some of the city’s best small venues under their belt, and with a name referencing the symbolic Manchester Bee, they’re on an upward trajectory towards practically having a cult following—their recent packed-out headline slot at the Night and Day Café was evidence enough. Ahead of this, I dropped in on the last rehearsal before their biggest show to date to see what they were all about.

After a brief prelude out in the rain with them waiting for someone to find a key to their scuzzy-but-characterful practice space opposite fka Kraak Gallery (now AATMA), I was led into the hive amid an enthusiastic run down of the names they toyed with before settling on Freakout Honey. “The Boris Johnson Massacre was one of our favourites – like the Brian Jonestown Massacre but more appropriate. It’s a bit mental but kind of cool. We actually used that name when we collaborated with the Purple Heart Parade so we were obviously determined to get it in!”

In fact, two of their guitarists, Ryan and Sam, are ex-members of The Purple Heart Parade, a Manchester shoegaze outfit. When asked how and why Freakout Honey consequently came together, they explained: “We came wanting something fresh – they [TPHP] were great musicians and great people, but another member of the band was settling down and having a kid and we weren’t having that! So we contacted Sofia [vocals] and Natalie [bass] who used to take photos of our old band. Then she enlisted Tom [drums] and then we found Taous [guitar], and that completed the jigsaw.”

The shoegaze influence of their old band is certainly strong, but Ryan was quick to point out that FH are not so quick to be pigeonholed into a genre: “We’ve all come together from very different musical backgrounds. We don’t really sound like anything else on the scene at the moment because there’s such a wide variety of influences.” Indeed, when asked about their sound, words like “tropical”, “glam” and “dark” were thrown into the mix, meanwhile Taous (labelled by one publication as ‘the effortless French slacker’) points out “my last band was a punk outfit—it was more of a joke band really but it shows that we’ve all come from different musical places… …we were called The Balotellis!”

Despite the sense of being slightly crazy, slightly ‘all over the place’ as a band, Freakout Honey seem to have a strong sense of identity, and they’re not afraid to bring an element of darkness to the table either. This is best illustrated in their song, ‘The Witch Surf’, a YouTube demo which is racking up the views. Singer Sofia explains: “I named it ‘The Witch’ because the song is actually about a woman killing a guy – the lyrics are pretty fucking deep – “baby what’s wrong tell me why you look so blue / did she take your soul and run away, did she abandon you?”

“When you die you go blue, so… She’s killed him and left, basically! Then we wanted to whack surf on the end because that’s just how we like it.” Ryan: “Some working titles actually stick and sound alright, you know?” Before I left, they gave a rendition of this, and it was as swirling, surfey, and dark as it was on record.

Finishing up, I asked about the forthcoming show. Ryan said: “The Night and Day is actually our second headline gig but it’s the single launch, and it’s definitely our biggest gig so far. We’re close to selling it out too, which is exciting.” “What?!” interjects Natalie, “Shit, I told everyone to get tickets on the door too, it’s gonna be RAMMED!”

She was right. Nothing in a practice room was going to match the intensity of Freakout Honey’s live performance. After support from locals Bad Molly and CABBAGE, Freakout Honey took to the stage in front of a drunken, packed out Night and Day Café and kicked off with ‘So Far’, followed by the driving, droning ‘Trap Me’. Musical intricacy is not what this set is about, but they have a real talent for creating the overall ‘sound’ that they want. Sparkling effects and swirling vocals combine to create a brand of surf-psyche, which, although far from entirely ‘unique’, has many in the audience transfixed and excited in equal measure. It’s certainly the sort of reverb-soaked gig that will help to attract a sell-out attendance to Cosmosis festival next, which they are playing along with The Jesus and Mary Chain and FH’s big influences The Brian Jonestown Massacre.

My personal highlight was the aforementioned ‘The Witch Surf’. Before playing this tune they offer a prize for the best dancer, before the song descends into an intense jam in which bassist Natalie loses it, grabbing a tambourine and wielding it like a weapon before dropping into the audience to join them in the exhuberant sweat-pit of a crowd. This pretty much sums up the band for me—a driven, close-knit and slightly unhinged psych outfit that really know how to work a crowd. On the current Manchester live scene, they’re more than likely going places, so keep your eyes peeled.