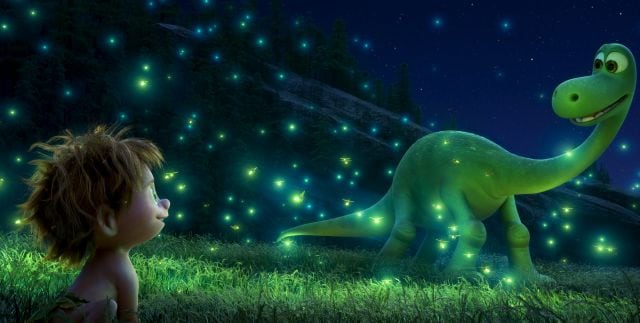 What if the meteorite that hit Earth 65 million years ago and destroyed the dinosaurs…missed? Would the world as we know it even exist? Pixar’s second film of the year, and ancestor to the specular Inside Out, The Good Dinosaur, plays with this idea in the utmost imaginary way. The very least you would expect from the animated studio kings. The consequences of the non-extinction towards these reptilian creatures leads to their domination at the top of the food chain, with humanity inferior and commonly referred to as ‘wilderness critters’. The premise of the film is second to none, only conceptualized by Lasseter and co. Nonetheless, the innovation that is so synonymous with Disney’s sister studio stops at its foremost blueprint.

Arlo (Raymond Ochoa) is a young Apatosaurus, and is part of an agrarian family in an idyllic home at the base of Clawtooth mountain—an ominous set of three snowy peaks. He is unlike his brother and sister, who are well-machined parts of their group. His inability to find a place in the agricultural landscape leads towards pressure to make his mark on his kin. An opportunity is presented, however, when one ‘critter’ is caught in a trap; this animalistic creature is Spot, a canine-like human. Growling and howling through his screen time, this little enigmatic thing shines in every scene. Revering the stereotypical dog and boy story—as established by classics like Lassie—Sohn enables his characters to evolve into a pastiche of this narrative framework.

As always with Pixar, the animation is breathtaking. The palette of colours in the environment might possibly be the most lifelike ever portrayed on screen. A use of the scope of these forests, mountains etc. is only used in the background of scenes. Within panning and wide shots, they in themselves are untouched by man and dinosaur alike. But with these fascinating works comes the heavy emphasis of cartoon-animated creatures. The binary between the two is a little distracting at times, but to a child’s eye, this may not be so.

The problematic development process of The Good Dinosaur has been well-documented with a total re-development of the story, and even a change of directors from Bob Peterson to Peter Sohn, plus a total re-cast. The likes of Neil Patrick Harris, John Lithgow, Judy Greer and Bill Hader were all removed for Jeffery Wright and Steve Zahn. This re-direction is clearly evident in the simply formulaic structure, harking to such classics as The Lion King. An initial release date of 2013 was set, and it should have avoided being released after Pete Docter’s Inside Out, which is in contention for Best Feature Film at this year’s Oscars.

Unlike many other of Pixar’s films, the thematic undertones of the work could propose a problem for very young children. Fear, death and loneliness are all challenges to be overcome by Arlo. In particular, during my screening, numerous smaller children were carried out in wailing fashion. These themes are prevalent in life itself, of course; however, they may possibly be a little overwhelming for younger children. This is not to say that the film does not deliver joyous comical moments between the two central characters (one including a Dumbo-esque psychedelic sequence through the consumption of a strange fruit).

Whatever feature is released by Pixar, they will always hold a special place in pop culture’s heart. Even the supposed lesser films like Brave, Cars and Monsters University have all found resonance to certain children and adults alike. This, given time, will also apply to The Good Dinosaur (even if the short film, Sanjay’s Super Team, that shows before the main event, is slightly better than the former). The rise of animation as an art form should be taken seriously by the Academy and critics alike; not simply branded as child’s play.

Thankfully, Arlo and Spot are not quite as extinct as in real life.