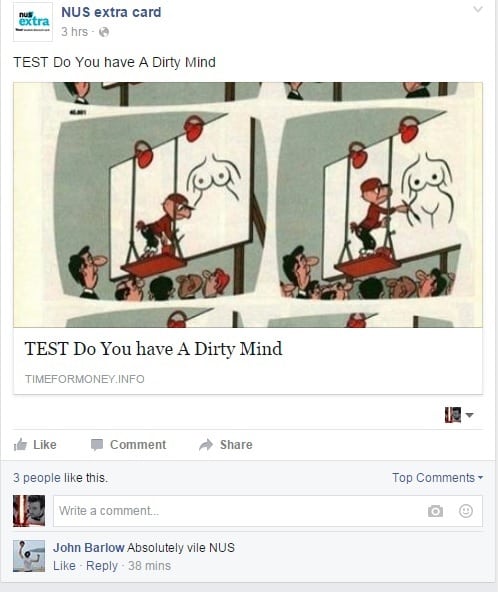 One of the posts on the page before it was deleted. Photo: Screenshot

The ‘NUS extra card’ page on Facebook appeared to have been hacked earlier in the day, with spam content from a website named timeformoney.info being posted instead of the company’s content. The situation now appears to have been resolved with all offending posts deleted.

The posts began appearing at 11:27am this morning on the page with almost 87,000 followers, with occasionally explicit entries written in broken and at times unintelligible English such as “The Line Is To Long”, “Dont Cheat The Goat”, and “s3x wired coital trance”.

All posts, numbering 12 before deletion, were from timeformoney.info, and appeared to link to web comics, some of which seemed pornographic.

Many commenters were shocked at the inappropriacy. Facebook user John Barlow commented: “Disgusting I will be unfollowing your page”.

NUS Extra tweeted: “Hello, our Facebook page has been hacked. We are working with Facebook to resolve the issue ASAP. Sorry for any inconvenience caused.”

At around 3pm all the posts disappeared from the page.